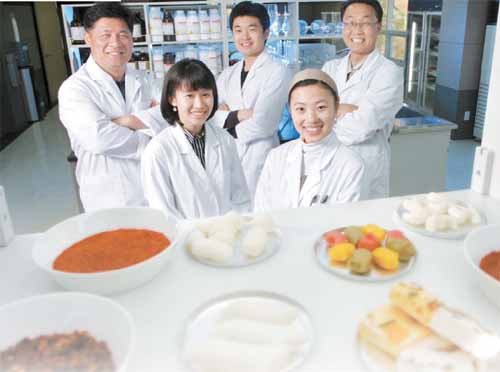 In the laboratory, men and women in white gowns sit hunched over work counters covered in all manner of apparatus.

Behind them glass beakers and bottles of chemicals fill the shelves and the room is filled with the steady drone of monitors and machinery.

In one corner of the lab at the research institute is a huge glass refrigerator that stores about 30 different types of tteok, Korean rice cakes, and a large gas oven.

This is the Topokki Food Research Institute, an affiliate of Korea Rice Foodstuffs Association, which opened on March 11 in Yongin, Gyeonggi, as the nation’s very first institute exclusively dedicated to studying tteokbokki, sweet but spicy boiled rice cakes. 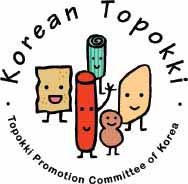 It’s a popular snack here, so popular that the government thinks it deserves its own research institute and globalization campaign.

One of the first steps along the road to spreading the word about the tasty snack was a name change. Tteokbokki was changed to “Topokki” to make it easier for non-Koreans to pronounce.

Some might ask why tteokbokki, and not one of the other numerous possibilities from Korean cuisine, has been chosen for promotion. After all, tteokbokki is a very straightforward dish: rice cakes, a spoonful of pepper paste, sugar and some chopped cabbage, onions or carrots. Even the vegetables are optional since with or without them the taste doesn’t change that much.

This simple dish is a far cry from the delicacies found in gujeolpan, a dish comprising nine different seasoned vegetables that was once only consumed by the gentry.

It’s also a snack that is widely available. For about 2,000 won ($1.40) you can pick up tteokbokki from street vendors in virtually all neighborhoods across the nation.

“Korean food is excellent in terms of nutrition but it is hard to globalize it because the recipes are complicated,” said Lee Joo-young from the food ministry. “Japan’s sushi and Italy’s pasta have gained international recognition because they are simple to prepare.”

To get tteokbokki onto the world stage, the food ministry is prepared to inject 14 billion won over the next five years, which makes you wonder if there isn’t another agenda. After all, that’s a lot of money to simply get the snack to more people.

So what’s going on?

According to Lee, the food ministry does indeed have its eye on another target: to boost rice consumption and help local farmers.

People in Korea are eating less rice these days.

“Koreans usually eat two meals with rice a day, which is why the ministry has been developing and promoting a range of rice products such as rice noodles, rice ramen and rice liquor. “These days adults eat on average around 75.8 kilograms [167 pounds] of rice per year, down from 130 kilograms in 1988,” Lee said. None of these rice products, however, have succeeded in increasing rice consumption.

Tteok shaped as numbers created by local food manufacturers for use in tteokbokki.

But a statistic caught the attention of the food ministry. According to the Korea Rice Foodstuffs Association, the tteokbokki market was estimated to be 900 billion won in 2008, while the 2007 dining industry earned a total of 56 trillion won.

“Considering the Japanese food market in 2007 in Korea was worth around 1.4 trillion won, it’s meaningful that the tteokbokki industry alone was worth 900 billion won here in 2008,” said an official from the Ministry for Food, Agriculture, Forestry and Fisheries.

Since about 50 percent of Korean farmers make a living from the rice harvest, the food ministry has to do something about the falling levels of rice consumption to support the local agricultural industry, and it firmly believes tteokbokki is the answer.

“Investing in tteokbokki is a way for us to keep our food sovereignty,” Lee added.

The institute is led by four researchers who have a culinary background, one marketing expert and Lee Shang-hyo, the head of the institute who has rice in his blood. 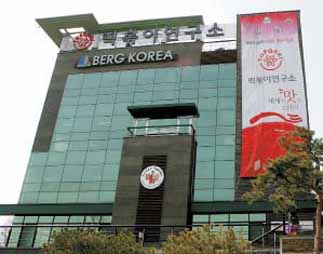 He has been researching how to turn rice into processed foods for the last two decades at the state-run Korea Food Research Institute.

“It’s not all about globalizing Korean food,” he said. “People who make processed rice foods want new products but they don’t have enough time to develop new tteok and sauces.”

Kim Yong-su leads the sauce development team. He used to work for Ottogi Corporation, a leading processed food manufacturer, where he developed a bulgogi-flavored sauce for McDonald’s.

Kim’s bulgogi, or marinated beef, sauce, became a hit among Koreans. The sauce was even exported to Japan, Taiwan and Thailand. With a single sauce, Ottogi could earn royalties from foreign branches of McDonald’s, which is what the Topokki Food Research Institute wants to achieve in the near future.

“When people realize that I’m working for an institute to research tteokbokki, the first reaction I get is laughter. People think there is nothing worth researching about this snack,” said Kim. “But it’s not true. Since the ultimate goal of this research institute is globalizing tteokbokki, our efforts to develop various sauces which will appeal to non-Koreans are under way.”

Instead of red pepper paste, Kim says cream and tomato sauces can be used for the European market, while sauce flavored with bonito flakes might appeal to Japan. For the Mexican market, the researchers are working on a pepper-based sauce.

Hwang Jae-ho is responsible for creating different kinds of texture for the tteok.

“We conducted a survey among foreigners and we found that some didn’t like the chewy texture of tteok, because they are more familiar with non-sticky rice, which is more popular in Western countries,” said Hwang.

Another challenge for the researchers is to create a tteok variety that doesn’t go rock-hard when it cools.

Another way to promote tteok is creating different kinds of shapes. Just like pasta can come in different forms, you can buy funny-shaped tteok here such as tteok with holes in the middle, which allows more of the sauce to seep in.

“The first overseas tteokbokki restaurant is likely to be opened in Vladivostok [in Russia] in September because Russia shares the same cultural codes with European countries,” Lee said.

Tteokbokki dates back to the Joseon Dynasty (1392-1910). The dish was enjoyed by royal families, but the recipe was different. Based on soy sauce, tteokbokki used to be served with mushrooms, spinach and other vegetables, according to the Institute of Korean Royal Cuisine.

This kind of tteokbokki is available at upscale restaurants these days and you’re unlikely to find it at street stalls.

It will take place from March 28 to 29 at the aT Center, located in Yangjae-dong, southern Seoul.

Co-organized by the Ministry for Food, Agriculture, Forestry and Fisheries and Korea Rice Foodstuffs Association, the festival is aimed to promote tteokbokki and shed light on the snack’s global appeal.

During the two-day festival, visitors can glimpse the history of tteok and tteokbokki, and find out how the rice cakes are produced.

In addition, visitors can discover information about tteokbokki restaurants and 40 recipes.

There will be a cooking competition and other hands-on events such as creating a new recipe.

The cooking competition will consist of two parts: one for students and another for adults.