To many of her ardent fans, Juliette Binoche will forever be remembered as the shabby woman dancing passionately on the oldest bridge in Paris in the film “Les Amants du Pont-Neuf (The Lovers on the Bridge).”

Eighteen years later she’s still got that star quality, and local fans of the well-known French actress had a golden chance to see her in person Wednesday. She was in town to promote her new film, “Summer Hours (L’Heure d’ete)” which will be released in Korea on March 26. She will also perform on stage as a modern dancer in the work “in-i,” created by British choreographer Akram Khan.

The 45-year-old actress has long captivated fans around the world with her beauty. And she’s still got it. She graced the stage at Hypertheque Nada at DongSoong Art Center in Daehangno, central Seoul, on Wednesday afternoon for a press conference and a preview of Summer Hours.

“I was very much impressed by the huge number of cinephiles in Korea,” said Binoche, who is visiting here for the first time. 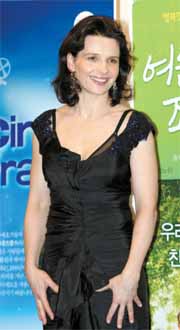 Binoche arrives at a press conference for a preview of the film last Wednesday at DongSoong Art Center in Daehangno, central Seoul. Provided by Pancinema; JES

There is another special occasion that made Binoche’s visit to Korea meaningful: “Cine France 2009,” the annual French cinema event organized by the French Cultural Center in Seoul since 2006, has launched a special retrospective of Juliette Binoche’s films as its first program of the year. The event aims to introduce French films and culture to the Korean public.

Binoche was humble when asked how she felt about the retrospective, saying, “I’m flattered. I don’t think I represent most French actresses because I’ve worked with directors from many different countries throughout my career.”

Many French film fans, however, seem to disagree. They refer to her as “La Binoche,” a term of endearment for her contributions to the French cinema.

“Art doesn’t need a ‘passport’ to cross the border into another country and I think active cultural exchange among countries is very important,” Binoche said.

“In the past, the West had a great effect on the East, from a cultural perspective, while now the situation has been reversed.

“I’m personally attached to calligraphy, which shows off the ‘beauty of the negative space,’” she added.

Binoche also discussed her interest in Korean films and directors. “I saw the Korean movie ‘Secret Sunshine’ last night, though I failed to finish it due to its lack of English subtitles,” she said. “But I plan to watch more Korean films during my stay here. I have heard so much about brilliant Korean directors and have developed a thirst for Korean movies.”

Binoche was also passionate when talking about her somewhat belated debut as a dancer. “As an actress, I’ve always looked for a wide spectrum of ways to express myself and dancing just happens to be one of them.

“It’s always been important for me to communicate and have relationships with other people by expressing myself in various ways,” she said. “And I’m never afraid of trying to spread my wings.”