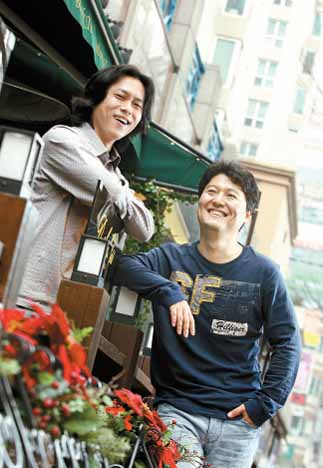 “Heavy Mach,” an online game for the iPhone device developed by two Korean designers, hit the jackpot at Apple Inc.’s online App Store at the end of last month when it made it onto the Top 10 Applications List in the games genre of the online market in terms of the number of paid downloads, and has maintained its fifth place standing ever since.

With more than 100,000 paid downloads, the game has garnered over $100,000 in sales and has been favored with more than 800 user comments, which is indicative of its popularity.

Byeon Hae-jun, a 37-year-old game developer based in Bundang, Gyeonggi, and Park Jae-cheol, 36, a graphic artist, are the protagonists of this success story. Both currently work for Npluto, a local game developer affiliated with NHN, operator of the nation’s largest portal, Naver.

Asked what encouraged them to apply for the App Store, the answer was simple: “Because it’s fun.”

Byeon set his sights on the App Store in September. He created two games for the iPhone and they got some attention, but he wasn’t satisfied with the results.

“After taking a close look at my creations, I discovered that what was missing was high-quality graphics, which are essential to attracting sophisticated online gamers from around the world,” Byeon said.

So Byeon started looking for a graphic artist to work with and made a deal with Park, a colleague from his workplace known for his exceptional design skills. And that’s how it all began.

The item the game duo selected for their ambitious project was a realistic tank shooting game, in which a simulated tank advances, hitting targets with its cannon.

“We thought the high-quality graphics and the satisfaction of hitting the target during the game would be the key to the success of our product,” said Park.

Since this was not a company project, but something they were doing on their own, Byeon and Park had to put in extra hours outside of work to get the job done.

After more than four months of hard work involving many all-nighters, they finally came up with their first collaborative product early last month. They posted it to the App Store and the response was good, but it was still not the reception they had been hoping for.

Questioning the marketability of the product with a price of $2.99 per download, they decided to do something drastic. They cut the price down to $0.99, and the game shot up to fifth place on the applications list.

It was the first time that a product made by a Korean game developer had made it into the Top 5 at the App Store.

“It’s still hard to believe that netizens around the world enjoy the game we made,” Byeon said.

The duo is already working on ideas for the next editions of Heavy Mach. “This is less like work and more like play for us now that we can fully concentrate on developing the game without having to focus on other things,” Park said.