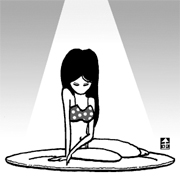 The film “Moulin Rouge,” directed by Baz Luhrmann, is based on the world of show business in Paris, in a turbulent age at the end of the 19th century. The great club owner Harold Zidler is seeking an investor so he can produce a new show on a grand scale never before seen. He finds one in The Duke, who demands something in return: one night with Satine, the star of the club in the film’s name.

But this story is not limited to faraway lands. In the beginning of the Korean film, “The King and the Clown,” directed by Lee Joon-ik, the main character, Gong-gil, played by Lee Jun-gi, is presented to the district governor for the night in return for allowing the touring company to perform in the area.

The article, “Grief of female performers,” in Yi Neung-hwa’s “A Book of Stories on Joseon Folklore,” printed in 1927, tells us that similar incidents happened to women who belonged to singing and dancing troupes in the past.

People have long been attracted to the entertainment industry, rich as it is with the temptations of fame, power and money. The rise of capitalism has added the elements of collusion and other forms of corruption.

The French novel “Nana” by Emile Zola depicts the degradation of an age where it was difficult to tell the difference between a prostitute and a high-class coquette.

The chain linking such secretive deals cannot easily be broken because it has been welded into place over time. The difference between deals that are voluntary and those that are forced is also as unclear as a line drawn on water.

In Korea, there has long been talk of collusion in the entertainment industry. The suicide of actress Jang Ja-yeon has re-ignited rumors about backroom deals involving stars who dominate TV advertisements, even those who are not actively performing at the moment.

Letters written by Jang before her death reveal that she may have been threatened, abused and forced to trade sex for favors.

Those she has named as responsible, high-profile figures in the entertainment industry, may be punished for their actions.

However, the problem is that there does not appear to be any way of preventing someone from becoming the next victim.

Long-standing problems in the entertainment industry such as contracts with hidden clauses, closed auditions and the profit structures of small management companies cannot easily be resolved with minor adjustments, and even if they could, those in search of a dark deal would easily find some other way to do their business.As long as the desire for the privileges that come with power and money does not disappear, and as long as those in power continue to think they can make questionable propositions and get away with it, the system will continue to function as it is.

In the words of Lao Tzu, “Those who know satisfaction are not disgraced, those who know when to stop face no peril.” This is an aphorism that both the tempters and the tempted should take to heart.