A Legend lands for his first Seoul gig

A Legend lands for his first Seoul gig 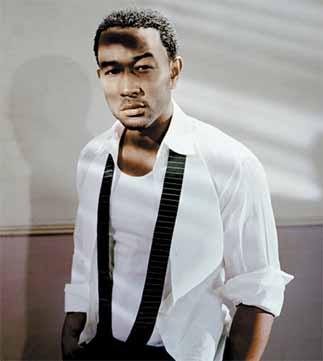 John Legend. Provided by the organizer

These topics have generated their own share of buzz in Korea. The soul star often associated with all of these is John Legend, and he is coming to town this week for his first concert in Korea.

At the 2005 BET Awards, the soulful R&B newcomer performed his hit “Ordinary People” with living legend Stevie Wonder. Legend is even characterized by some as this generation’s Stevie Wonder. In 2007, when Koreans fell in love with films about music like “Once,” John Legend’s song, “Someday,” written for the film August Rush, left a lasting impression. Last year, the young sensation dedicated the political song “If You’re Out There” to U.S. President Barack Obama to support his campaign.

“Now my international journey begins. I won’t be home for about 50 days! This will be my longest stretch of not sleeping in my own bed,” Legend said in a recent posting on his Web site about his world tour for his latest album “Evolver.” “I’m excited to meet my Asian fans who’ve never been to a JL show before.”

Like Evan, the musical prodigy in August Rush, Legend showed his musical prowess at an early age. He began studying the piano at age four and was leading his church choir at 11. Today, with three studio albums under his belt, the 30-year-old is a Grammy-award winning singer, songwriter and pianist.

“Although Koreans are relatively unfamiliar with soul music, we believe the number of fans is increasing,” said Mun So-hyeon, who is with the organizer. “The biggest audience at Olympic Hall was last year’s Jamiroquai concert. It’s possible that the Legend concert will break that record.”