A taste of paradise and a touch of reality

A taste of paradise and a touch of reality 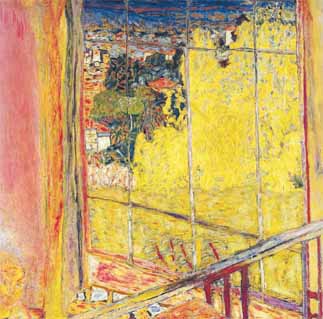 “L’atelier au Mimosa” by Pierre Bonnard. Provided by the Seoul Museum of Art

Imagine paradise. Then imagine what it would be if it were created by artists.

This was the theme of the 2008 Pompidou Special Exhibition that ended last Sunday. More than 387,000 art lovers have filed into the Seoul Museum of Art since last November, hoping to catch a breath of heaven in the middle of Korea’s busiest city.

But the artists’ paradise was not exactly hedonistic in the Epicurean sense, as one might have expected. In fact, the exhibition presented small themes such as vanity and darkness, ideas that are normally considered awkward to place under the exhibition’s title “Arcadia” ? a pastoral region in Greek mythology that inspired Roman poet Virgil. But the concept of the exhibition made sense as you moved from one artwork to the next, from one gallery to another.

Altogether there were 79 pieces by artists such as Picasso, Matisse, Chagall and Miro, as well as Yves Klein and Gary Hill, artists who have long questioned the essence of being.

This contemplation led them to contemplate human mortality, which was reflected in their creations. In their works, the boundary between Eden and Earth became vague. After all, if humans existed in paradise, would death not be there as well?

Bonnard’s “L’atelier au Mimosa” is a good example of how paradise and reality can live together. At first glance, the bright yellow painting depicts a hill covered in mimosa flowers. This was in fact the view from Bonnard’s window. But look carefully and you will see a face in the left-hand corner. It’s an image of the artist’s deceased wife, making the entire painting seem as if it were a scene in heaven. “Grand Interieur Rouge,” one of the most famous works by Matisse, shows a world filled with fiery light. The plants, chairs and tables seem scattered, but the blunt red gathers them together to create artistic harmony. The artist certainly knows how to use color. Though not a religious man, Matisse emphasized that “the essential thing is to put oneself in a frame of mind which is close to that of prayer.” Artists are commonly thought to be alienated from reality, trapped in their own space and consumed by their emotions. What was interesting about this exhibition was that despite these preconceptions, the artworks showed a strong sense of life, of “being human.”

They weren’t telling us Arcadia was unattainable. Rather, they were hopeful, reminding us we can exist in paradise, and that paradise can exist within us. As Didier Ottinger, the chief curator of the Pompidou Centre, pointed out, “nostalgia for the past is often transformed into new aspirations for the future.”

In this sense, the Pompidou Special Exhibition has certainly achieved its aims.