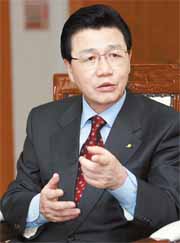 CHUNCHEON, Gangwon - Kim Jin-sun, governor of Gangwon, is confidant that the east coast resort town of Pyeongchang is ready to host the 2018 Winter Olympics.

“Under the supervision of the [International Olympic Committee], I hope all members can visit the candidate cities and see the venues for themselves,” Kim said in an interview at his office in this modest town known as the “City of Lakes.”

Presently, the IOC operates a separate evaluation commission to conduct on-site reviews and compile reports on prospective hosts for the Olympic Games. The commission includes only a few IOC members, leaving hundreds of other members to rely on reports.

Kim, though, may not have to worry about having IOC members getting acquainted with Pyeongchang.

Pending government approval, the Gangwon town will bid for the Winter Games for the third straight time by virtue of having hosted a series of major winter sporting competitions, including world championships in snowboarding, biathlon and women’s curling,

Pyeongchang lost out to Vancouver for the 2010 Games and to Russia’s Sochi for 2014 but this time it may have some history on its side. Since the Winter Olympics were first staged in 1924, only Ostersund, Sweden, has had three unsuccessful bids in a row.

Kim has been Gangwon governor since 1998 and oversaw Pyeongchang’s two previous bids. That also means he’s been a part of the two close defeats in the bidding process.

He knows better than to feel overly confident.

“We can’t afford to be too optimistic,” Kim said. “We have to stay grounded. We’ve had some close calls, and we have to do our absolute best this time.”

Kim says he senses strong support from Gangwon residents. Before bidding for the 2014 Winter Olympics, an IOC survey showed a 97 percent support rate among Pyeongchang residents for their hometown’s bid.

The governor said while the residents were “disappointed and discouraged” after the second failed bid, “they know it won’t be easy but also know that we have to go for it again.”

With no other Korean city in the running, the Korean Olympic Committee is expected to announce
Pyeongchang as the Korean candidate this spring. If so, the KOC will inform the IOC in October of Pyeongchang’s candidacy.

The IOC is scheduled to select the official candidate cities in July next year. Then in July 2011, at the 123rd IOC Session, in Durban, South Africa, the host city for the 2018 Winter Olympics will be announced.

Other major winter sports competitions that have been held in
Pyeongchang and its neighboring cities in Gangwon include the Snowboard World Championships, organized by the International Ski Federation, which were staged in Asia for the first time in January in Hoengseong, near Pyeongchang.

From Feb. 14 to 22, the International Biathlon Union’s annual Biathlon World Championships was held at Pyeongchang’s Alpensia Resort, making its first Asian stop in its 51-year history.

The biathlon championships have been out of Europe only twice: Lake Placid, New York, was the host in 1973 and 1987.

Then this time, it’s the World Women’s Curling Championship, which began last Saturday in Gangneung. Located northeast of Pyeongchang, this coastal town will host all the Winter Olympics’ curling, figure skating, speed skating and hockey events, as long as Pyeongchang comes up trumps.

Bringing world championships here is part of the overall strategy to boost the chances of a successful bid, Kim said.

“It’s all about letting the rest of the world know we have the requisite facilities and are fully capable of hosting international competitions,” the governor said. “Padding our resume by successfully hosting such events is just as important as building venues.”

While curling won’t exactly set a ratings record here, Korean curlers have done well in competitions. Both the men’s and women’s teams won the gold medal at the 2007 Asian Winter Games in Changchun, China.

And the Gangwon provincial government has supported and nurtured curlers, as well as other winter athletes in bobsleigh, biathlon, skeleton, alpine skiing, snowboarding, ski jumping and freestyle skiing.

Overall, 30 schools in Gangwon have produced 560 winter athletes since 2001, according to the Gangwon International Sports Committee, which will function as the de facto Olympic bidding committee.

And the governor is a proud father of the efforts.

“I can’t think of a single other metropolitan city or province that has worked as hard as Gangwon in developing winter sports and winter athletes,” Kim said.

And the next step is to get these young athletes to compete on the home soil, ice and snow in 2018.

“Following two failed bids, we’ve improved our existing facilities and other infrastructure,” Kim said. “I think Pyeongchang is ready. We guarantee that we will do our very best to succeed.”