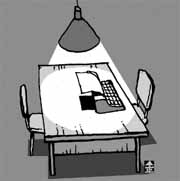 Novelist Kim Ha-ki paid a heavy price for swimming in the restricted Tumen River that serves as the northeastern border between North Korea and China.

While traveling through Yanbian in the summer of 1996, he recalled he was lured by unknown forces to jump into the shallow moonlit waters of the Tumen. The novelist may have been overwhelmed by the emotional tide of the river or of being so close to North Korean soil. Or it may have been just a whimsical stunt under the influence of the copious amounts of alcohol he had enjoyed that night at an ethnic Korean restaurant. Regardless of his motivation, he waded into the roaring river and woke up later on its bank with guns pointed at his face by North Korean soldiers.

“What are you, comrade, a South Korean swimmer?” was the first question the North Korean security officer asked. He was later cajoled to stay in North Korea, get married and write novels.

When he was freed from espionage charges after repatriation to the South, he was greeted by South Korean security officials for more questioning. By providing intelligence to the North about long-serving North Korean prisoners refusing to shift loyalty to South Korea and information on the border areas he gathered as he talked with North Korean officials, he violated South Korean security laws. He was found guilty of violating the National Security Law and served a prison sentence of seven months.

Kim later recalled that the ordeal of interrogations from both the North and the South and the unavoidable signing of testimonies left a void in his mind.

As he trudged through the interrogation rooms, courtrooms and jail, he often felt a strong temptation to commit suicide.

Two female American journalists have been detained by North Koreans for more than a week now after crossing the Tumen River in search of a story about North Korean refugees.

Their arrest comes at a touchy time when Pyongyang is walking a tightrope, testing the new U.S. administration with its plan to fire a satellite-equipped rocket, a launch many fear is a test for a long-range missile.

Given North Korea’s history, there is a big chance that the two journalists may become pawns for political bargaining.

In 1995, North Korean authorities used the release of a young American, Evan Hunziker, who was held in North Korea for three months for alleged spying activities, to generate an exchange of envoys between Pyongyang and Washington.

Hunziker denied any spying charges and later shot himself in a motel after his release.

The tragedy of a divided country has produced too many victims dealt with wrongly by the heavy hand of history.