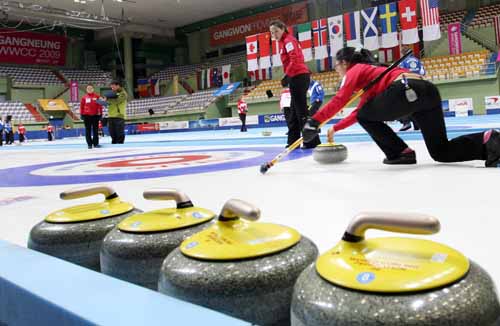 Gangwon has held several large scale sporting events this year and the latest is the Gangneung Women’s World Curling Championship.

It’s only the second time this event has been held in Asia, and it’s a first for Korea.

The tourney follows hot on the heels of the FIS Snowboard World Championships in January and the IBU
Pyeongchang Biathlon Championship in February, which were both held in Gangwon, too.

The curling competition, which kicked off on Saturday, is taking place at the Gangneung International Ice Rink through Sunday.

The event has been going well with 2,000 visitors filling the stands for the afternoon matches.

Organized by the World Curling Federation, there are over 400 participants from Korea, China, Denmark, Germany, Italy, Norway, Russia, Scotland, Sweden, Switzerland, Canada and the U.S.

Canada, the defending champions led by Jennifer Jones , is the team to beat. Korea, led by Kim Mi-yeon, currently has one win and three losses as of Monday.

The women’s championships started in 1979 and have been held separately from the men’s event since 2005.

The venue, located in downtown Gangneung, is recognized by the International Skating Union (ISU) for major international events.

The arena, which features two ice rinks, can host up to 3,500 spectators.

The condition of the ice and overall quality of the facilities are very important since they can determine the outcome of matches. The ice measures 45 to 46 meters (146 to 150 feet) in length by 4.4 to 5 meters and the temperature must be kept at around minus 5 degrees Celsius (23 F).

“President Les Harrison and other World Curling Federation officials have expressed their satisfaction with the venue, stating that Gangneung International Ice Rink’s ice quality and the air ventilation system are in great condition, going so far as to say the quality of the venue does not pale in comparison to those in Canada,” said Lee Dong-hoon in the media relations division.

Curling originated in Scotland during the medieval period and is a popular sport in Canada, Scotland, Scandinavia, Germany and the U.S.

The sport is relatively unknown to many around the world including Koreans.

Played on ice, the sport consists of two teams of four players. Each team gets a turn sliding a curling stone made of heavy granite.

A handle is fixed on the top of the stone. The point of the game is to position the rock in the target at the other end of the ice runway.

A player pushes off a block, called a hack, to slide the stone.

Two other players sweep the ice in front of the traveling stone to reduce friction.

The four curlers on each team take turns sliding stones in strategic positions.

The stones closest to the center of the ring, called a button, are counted to determine the winner.

Although it’s not a popular sport in Korea, the Korean men’s and women’s teams won gold at the 2007 Winter Asian Games in Changchun, China.

So why, then, is Gangwon Province hosting biathlon and curling competitions if they are not as popular as, say, football and baseball?

The reason is simple.

The province has been trying hard to host the Winter Olympics, and, having lost the 2014 bid to Sochi, Russia, it is aiming for the 2018 Winter Olympics.

A number of minor sporting competitions in previous years and the major events this year as well as the Dream Program are part of a concerted effort to showcase venues.

“We are trying to show the Olympics committee that we are capable of hosting major competitions with venues that are up to international standards,” said Min Dae-geun of the international events division in the Gangwon provincial government.

“The underlying meaning of global events such as the Olympics is to promote and emphasize peace and unity.

“The Dream Program is an annual program for youths from warm regions to try their hands at winter sports. Since 2004, 578 young people from 39 countries have participated,” added Min.

The Gangwon Province officials have one more sizable event planned this year.

“A Ski Jump Grand Prix will be held from Sept. 5 to 6 at the Alpensia Ski Resort to cap off a busy year,” said Lee Gye-seok of the international events division.