A welcome return to Chinese opera

A welcome return to Chinese opera 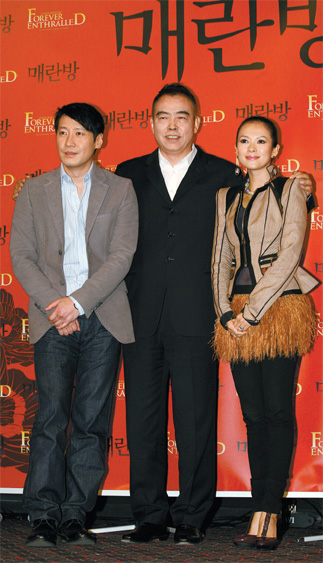 Leon Lai (left), Chen Kaige (center) and Zhang Ziyi arrive at a press conference for their movie “Forever Enthralled” last Tuesday at the CGV Wangsimni in eastern Seoul. Provided by All That Cinema

It’s a movie event that has film fans buzzing with excitement.

The director of the 1993 Chinese film “Farewell My Concubine” has returned to the world of Chinese opera with his latest movie, and he was in Seoul this week with some of the cast to tell us all about it.

Chen Kaige, the winner of Palme d’Or at the Cannes Film Festival for his 1993 hit, was joined by Leon Lai and Ziyi to promote “Forever Enthralled.”

Shown in competition at the 2009 Berlin International Film Festival for the Golden Bear award last month, Forever Enthralled, which will be released early next month in Korea, tells the story of the late Peking Opera master Mei Lanfang. 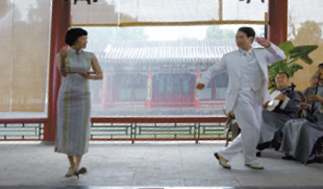 Leon Lai (right) and Zhang Ziyi in a scene from their new movie “Forever Enthralled.” Provided by All That Cinema

“I expect many will compare me with Leslie Cheung [star of Farewell My Concubine], but I feel no pressure about that,” said Lai, who stars as Mei Lanfang, during a press conference last Tuesday at the CGV Multiplex in Wangsimni, eastern Seoul.

The character Mei Lanfang is based on the real life story of Dieyi, the legendary Chinese opera performer who was famous for playing female roles in the 1930s.

“I don’t think much about such a comparison because Leslie Cheung is an actor I revere,” Lai added.

Lai said he undertook extensive study of the history of Peking Opera before shooting began for the film.

“I learned how to express myself like a woman through gesture during two months of intensive training for playing a Peking Opera performer,” Lai continued.

“It was more difficult than I expected to venture into a new field,” said Zhang, who visited Korea three years ago to promote her film “The Night Banquet.”

“It’s been a long time since I played a real-life character,” said Zhang. “Meng is a bright woman despite a heartbreaking love affair with Mei.”

To ensure that she was fully prepared for the role, Zhang said she practiced in front of mirrors hung all around her home.

Meanwhile, Lai talked about the paparazzi when asked about his own “paper shackles.” The restraints were imposed on Peking Opera performers, as shown in an early part of the movie.

Lai’s reference appeared to symbolize the fate of actors and actresses whose private lives can never be free from the public eye.

“I experienced my own ‘paper shackles’ when my home, from garret to kitchen, was exposed to paparazzi when I had left the windows open accidentally,” Lai said.

“As for her [Zhang], it must be a photo of her with her fiance taken at the beach,” he added jokingly.

Paparazzi photos revealing intimate scenes of Zhang and her fiance vacationing on a private beach early this year caused quite a stir, especially among conservative Chinese people as well as her legions of fans around the world.

“I tried to project a thorny path of an artist’s life and how they [artists] overcome difficulties in their life through this film,” Chen said.

“Mei Lanfang is a great artist who devoted his life to performing for the audience and was the first Chinese person to promote the performance of the female character in Peking Opera abroad by touring around the Western world,” the director added.

Forever Enthralled, which was released last December in China, is scheduled to hit local theaters on Apr. 9.