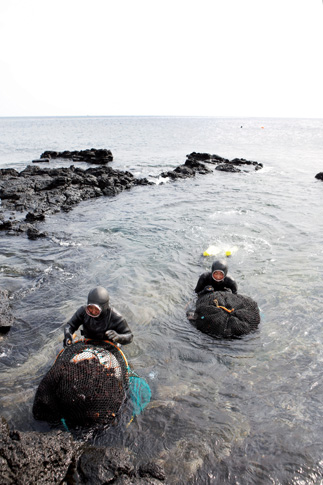 Jeju Island is well known as a tourist destination and as a place for honeymooners to begin a fruitful marriage, but one thing the province is not famous for is its cuisine.

Few Koreans can name a single dish that’s indigenous to this volcanic island, which lies 85 kilometers (52.8 miles) off the coast of South Jeolla.

They might be able to point out some of the different types of fish that reside in the surrounding waters, but it’s safe to say Jeju food has not set the world on fire.

In many ways, the food there reflects the island’s geographic isolation. Dishes are characterized by culinary simplicity and the use of plenty of seafood.

The land is not overly fertile and the rocky terrain is not suitable for farming. Even though the climate is mild and the air seems much fresher than in the urban areas of Korea, food has been scarce in this part of the world throughout history. 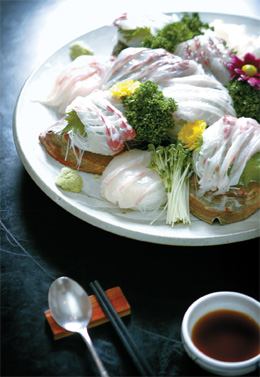 A plate of black porgy and yellow sea bream

To brave the strong winds and tough living conditions, Jeju people have adapted.

There is even a saying on the island that people ate whitesaddled reef fish as a substitute for rice when food was scare in spring. In the old days, grains were often used instead of rice, a more precious commodity, and spices were also rare. Instead of seasonings, materials at hand such as fish products and herbs were used.

This explains why Jeju cooking is somewhat bland compared to its spicier cousins on the mainland.

Take cold soybean paste soup for example. It’s a simple combination of water and soybean paste, which may seem odd to people from other provinces because of its sheer simplicity. 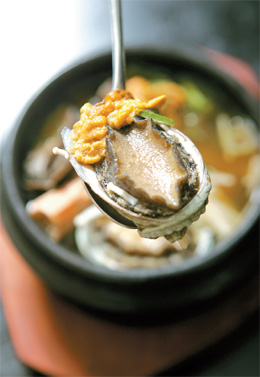 One of the more famous Jeju dishes, among islanders at least, is soybean paste soup with small abalone, shrimp and shellfish.

In keeping with the rather Spartan image that accompanies Jeju food, it’s no surprise that the culinary methods tend to be uncomplicated.

Jeju cooks will season broiled fish, such as cutlass, mackerel and sea bream, with nothing fancier than a just a pinch of salt.

It’s also no surprise given the abundance of seafood that one of the most popular foods on the island is sashimi, which is known as hoe in Korean. Some of the fish that can be eaten raw includes abalone (jeonbok), serranidae (dageumbari), striped beakperch (gatdom), common nibbler (baengedom) and brown-spotted grouper (bukbari).

Sashimi cut from these fish is renowned for its supple texture.

“The current around Jeju Island is fast and the water is cold, which makes the flesh chewier than the meat on fish caught in other areas,” said Ji Min-gu, a co-owner of Seopjicoji, a Jeju-themed restaurant in northern Seoul.

Dageumbari hoe is often described as the king of sashimi, and gatdom is even called the king of the sea.

Bukbari hoe is so rare and expensive that most people will never have the chance to sample its delights.

Abalone caught wild from the sea is rare. Its price can reach 380,000 won ($278) per kilogram (2.2 pounds), but it’s worth it. The taste is incomparable to that of abalone bred on a fish farm. “Farm-raised abalone is small and feels mushy,” Ji said.

In the past, it was difficult, if not impossible, to eat these precious fish in Seoul. 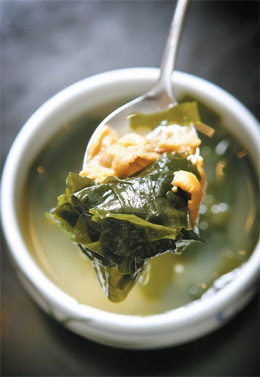 However, thanks to faster and more efficient transportation methods, a small number of restaurants now serve authentic Jeju food in the nation’s capital.

Jeong Hye-seon, 68, opened Jeju Tukbaeki 14 years ago. She was born in South Gyeongsang but she often went to Jeju to visit relatives there. Her brother-in-law, who taught her about Jeju food, is from the island. Although she’d never planned on being a restaurateur, she’s found herself at the helm of Jeju Tukbaeki, which is her first restaurant.

“I was told numerous times that I was good at cooking,” she said.

Comparing Jeju cuisine to that of other provinces, Jeong said, “Jeju food is savory and plain compared to spicy food from the Jeolla and Gyeongsang provinces.”

The restaurant serves a variety of grilled or boiled fish. Its menu includes cutlass or mackerel stews as well as grilled mackerel, cutlass and sea bream.

The seasoning for the fish stew is aged for a whole week before it is used. Most of the fish including cutlass, sea bream, abalone, coral fish and sea urchin used at the restaurants is flown in from Jeju.

Jeong boasts that she only uses natural ingredients for her food. Despite her age, she still makes all seasonings and side dishes served at the restaurant.

“I place great emphasis on freshness and devotion,” Jeong said. “I do everything from making the sauce to fermenting the bean paste.”

The sashimi restaurant Seopjicoji, which is named after a famous tourist site along the seashore of the island, serves a variety of hoe such as serranidae, striped beakperch, common nibbler, brown-spotted grouper, black porgy (gamseongdom), yellow sea bream (hwangdom) and abalone.

The restaurant was founded five years ago by Ji Min-gu and Lee Jong-hyeok, who are both Jeju natives.

“I wanted to let Seoul residents get a real taste of Jeju food,” Lee said. “It is fun to meet new people and to take on a new challenge.”

Most of the fish used for sashimi is flown live from the island, a journey door-to-door that takes around four hours.

What separates this restaurant from the crowd is that it uses the internal organs of natural fish shipped from Jeju for cooking.

The organs from farmed or dead fish cannot be consumed, according to Ji. Geubap, a rice bowl marinated with abalone organs, is served as a complimentary dish for special guests.

The dish is not on the menu because the organs are too small and too few for a full order.

Where to try Jeju food without actually going to Jeju Island

An English menu is available.

The restaurant is closed on the first and third Sunday of each month.

The restaurant has six branches in the Seoul metropolitan area. There are only private rooms and reservations are required.