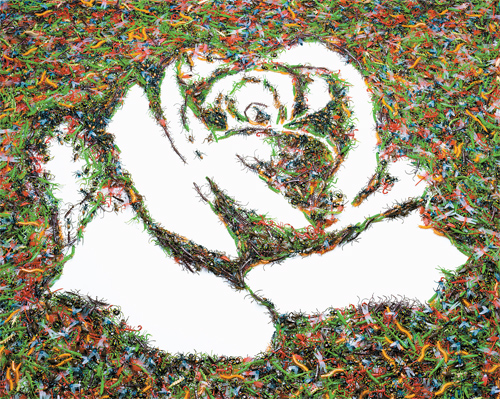 Vik Muniz uses unusual materials such as chocolate, woolen yarn, soil, toys, wire, garbage and even dust to create his works. And then he destroys them.

From a distance, his works look familiar. But a closer inspection reveals the medium of his pieces.

For the last 20 years, Muniz has recreated masterpieces, historic pictures and images of celebrities and pop culture through the use of these strange and sometimes edible materials. He then photographs the sculptural “drawings.”

Muniz’s works evoke old memories, but the viewer’s attention is soon taken by the way they distort the original images and Muniz’s use of unconventional materials. 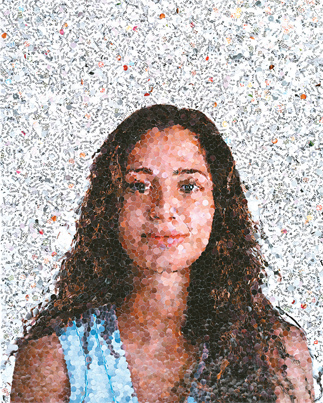 Muniz established a solid base as a postmodern artist, but his works began to capture the attention of the critics in the late 1990s. His works have been shown at major venues such as the Museum of Modern Art and the Guggenheim Museum, both in New York; the Tate Gallery and the Baltic Centre for Contemporary Art in London; and the Musee d’Orsay in Paris.

Muniz uses a range of techniques to transform his materials into reflections on art and illusion.

In a nod to Andy Warhol, he made two replicas of Leonardo da Vinci’s Mona Lisa: one with jelly and the other with peanut butter. His take on another Warhol work used black and red pepper and curry powder. And in the series “Pictures of Chocolate,” he used sugar, wire, thread and chocolate syrup to replicate Leonardo’s Last Supper. 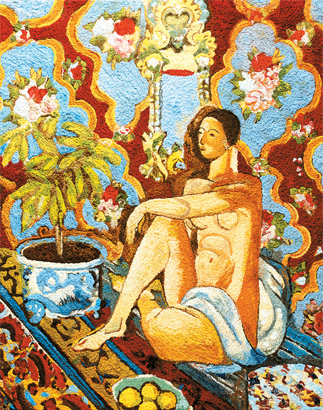 Decorative Figure on an Ornamental Background after Matisse. Provided by Insa Art Center

For the series “Pictures of Dust,” Muniz used dust collected over several months at the Whitney Museum of American Art to create drawings based on photographs of the museum’s sculpture collection. For his “Pictures of Clouds” series, he asked a skywriter to make sketches of clouds in the sky.

Born in Sao Paulo, Brazil, in 1961 and originally trained as a sculptor, Muniz now lives and works in Brooklyn, New York.

Thirteen of Muniz’s photographs will be exhibited at Insa Art Center in central Seoul through April 14. 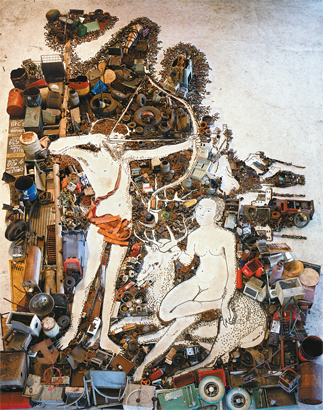