A lethal trail to the Blue House

A lethal trail to the Blue House 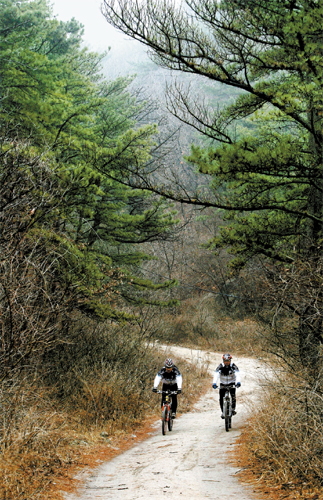 Two cyclists from a local bike club test-run the “Kim Sin-jo route” in Mount Bukhan, which will re-open this summer.[JoongAng Ilbo]

From the city of Yangju in Gyeonggi, drive along the four-lane Mt. Bukhan Highway to the entrance of Uiryong Road in the heart of the sprawling Mt. Bukhan National Park.

Leave your car and hike a kilometer up the road until you reach an army guard post. Beyond the post lies a 4.46-kilometer (2.77-mile) track through a dense pine forest, an unpaved dirt track that changed the course of relations between North and South Korea.

This is the so-called Kim Sin-jo route, which has been closed to the public since Jan. 21, 1968. But just last week the government announced that this infamous trail will be reopened this summer, 41 years after it was closed off.

The secret to why a seemingly innocuous mountain path has been off-limits for two generations can be discovered by looking into the origins of its name: Kim Sin-jo, a man’s name which has become synonymous with one of the most outrageous post-Korean War (1950-1953) attacks launched by the North on South Korea. 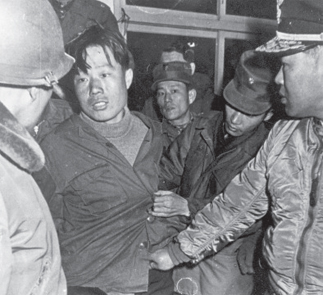 Kim Sin-jo (second from the left) was captured in Hongje-dong, western Seoul, early on Jan. 22, 1968. He was the only commando to be caught. The others were killed or were unaccounted for. At least one North Korean might have escaped back to North Korea.

In the winter of 1968, 31 elite North Korea commandos crossed the DMZ and made their way to Yangju.

Led by Kim, the heavily-armed North Korean agents chose the Uiryong Road as a shortcut to their ultimate destination: the Blue House, the South Korean president’s residence in the heart of Seoul.

On the morning of Jan. 21, after an encounter in the hills with some South Korean woodercutters whom Kim’s men lectured on communist ideology and then set free, the assassins succeeded in sneaking into Ui-dong, northern Seoul, but were spotted by South Korean security forces while passing Jaha Gate (North Gate) on Segeomjeong Hill in Jongno District.

They were no more than 300 meters from the Blue House when they were challenged. 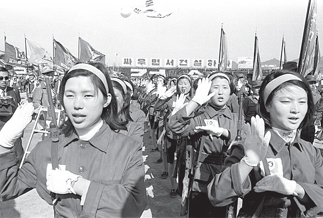 Female members of South Korea’s reserve forces take an oath at an inaugural ceremony in Daejeon on April 1, 1968. More than 10,000 women across the country volunteered for local reserve forces in March that year to help thwart possible attacks from the North.

Most of the North Korean squad was killed in the ensuing gunfight with South Korean forces. Kim was the only agent captured alive - at least one of the fighters is thought to have made it back to North Korea.

Kim’s subsequent revelation after his capture that he had come to “lop off the head of [then South Korean President] Park Chung Hee” shocked the nation. How could a bunch of assassins get so close to Park’s residence?

The foiled plot triggered a slew of countermeasures against possible Pyongyang-instigated guerilla attacks, including closing off Uiryong Road, the so-called Kim Sin-jo route. 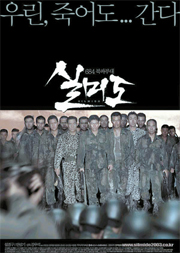 “Silmido,” a box-office hit in local theaters in 2003?2004, is based on true events surrounding a special unit of South Korean commandos who were trained for a mission in 1968 to kill North Korean leader Kim Il Sung in revenge for the assault on the Blue House earlier that year.

Other measures Park initiated to protect the capital included the construction of the Bugak Skyway and the Inwang Skyway.

These two roads were built as part of a policy by President Park, according to Sohn Jeong-mok, an expert in town planning and now an honorary professor at the University of Seoul, to develop regions outside the Blue House while at the same time restricting movement into neighborhoods near the presidential residence.

Park, who eventually succumbed to an assassin’s bullet in 1979, though it was his chief bodyguard and not a North Korean commando who pulled the trigger, also ordered the construction of the first and second Namsan tunnels in 1969 as part of a plan to fortify Seoul.

According to the plan devised by then Seoul mayor Kim Hyeon-ok, the tunnels were to be used for traffic during times of peace but as a shelter if war ever broke out again on the peninsula. 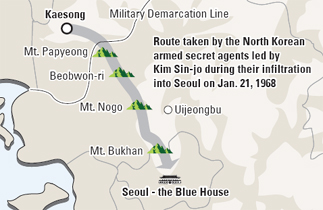 However, the most notable measure taken by the Park Chung Hee administration against possible future guerilla attacks was the establishment of local reserve forces, the first of their kind in the country.

“About 2.5 million reservists across the country will be fully armed so that the whole nation can be prepared for possible attacks by armed communist guerillas,” President Park declared less than a month after Kim, who is now a respected Christian minister in Seoul, and his crew made their move to the Blue House.

Following the President’s declaration, local reserve forces were soon put in to action. In November 1968, they were on the trail of 120 suspected communist guerillas who had infiltrated from the North into Uljin, North Gyeongsang and Samcheok, Gangwon.

Local reserve forces, which still exist today in Korea, are one conspicuous mark that the Jan. 21 incident left behind. Since then, all Korean men discharged from military service are automatically placed on the reserve list and obliged to undergo annual training.

Another special unit was formed in the aftermath of the Blue House attacks, which led to another bloody chapter in Korea’s turbulent modern history.

The “Silmido 684” unit was formed in April 1968, named after a barren islet off the west coast of Incheon on which the members were assembled. Their brutal training was preparation for an attack on Pyongyang as part of Park’s revenge attack.

The 31 members of the Silmido unit were social outcasts and convicted criminals given an unexpected shot at redemption if they succeeded in their mission of killing the North Korean leader at that time, Kim Il Sung.

But in August 1970, while the Silmido unit was still in training, President Park made public a plan to negotiate peaceful reunification between the two Koreas, apparently because he didn’t want to, or was told not to, disrupt the budding U.S.?Soviet detente, which rendered the special commando unit irrelevant.

Left in limbo, the Silmido unit rebelled on Aug. 23, 1971. They killed their trainers and set out for the nation’s capital. Landing at Incheon, the rebels commandeered a bus and arrived in Seoul to encounter a barricade of soldiers. A gunbattle in Daebang-dong, Youngdeungpo that afternoon left most of the outnumbered rebels dead. Four survivors were later executed.

The Silmido incident was concealed from the public by the South Korean dictatorship until the early 1990s. The story became more widely known following the 2003 release of the movie “Silmido.”