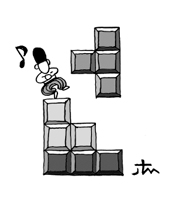 In 1988 when the video game universe was divided between Bubbles and Super Mario, a completely new engaging game consisting merely of blocks made a bombshell debut. The beloved Tetris is a video game puzzle in which seven types of blocks can be manipulated. The multicolored blocks rain down the screen to form horizontal rows, disappearing when they are complete. The completion of one playing field is celebrated with a dance by a wooden soldier to “Kalinka,” a lively Russian folk tune. The Russian touch is a tribute to the game’s creator, Alexey Pajitov, a mathematician with an ardent love of puzzles, who designed and programmed the game while working for the Soviet Academy of Science in 1985.

His idea originated from the square-block pentomino puzzle that dates back to ancient Roman times. Pentominoes are rectangular tiled boxes with 12 differing shapes of five unit squares. The Russian mathematician simplified the game to allow four unit squares making up seven blocks and named the video game after the Greek prefix tetra, meaning four.

The game, created to pass idle hours caused a sensation outside the Soviet Union when bundled on an IBM PC. In less than two years the game became a software blockbuster not only in Europe, but also in the United States and Japan. But its creator, stuck in communist USSR, was unable to cash in on the tremendous success. Because the former Soviet Union did little to claim copyrights, the game was locked in legal battles up to 1993. Moscow finally stepped in, but all Pajitov got in return was an IBM desktop. One can understand if Pajitov still bears some sore feelings, considering the game sold more than 70 million copies through the Nintendo Gameboy console alone. What’s surprising is that the game continues to draw players through evolutionary variations.

Tetris is still a sought-after function in today’s electronic devices like PDAs and mobile phones. The online game has hooked more than 500,000 in Korea alone. Tetris has also spawned an army of knockoffs and lookalikes.

The game’s biggest appeal lies in its simplicity. Anybody can take to it. One computer game magazine called the game “deceptively simple and insidiously addictive.” Studies showed that the game boosts brain activity, helping to prevent memory loss and ease the ill effects of stress.

The game’s creator, Pajitov, is due in Seoul on Tuesday. He has been living in the United States since 1991 and retrieved his copyrights from the Russian government in 1996. He is still active as a game programmer.

In interviews, he has repeatedly underscored the essence of computer games is fun. I hope he doesn’t look too closely into our game industry, swarming with dirty money and real-life violence, to see how far we have moved away from the definition of fun.