Get a little closer to the Rolling Stones

Get a little closer to the Rolling Stones 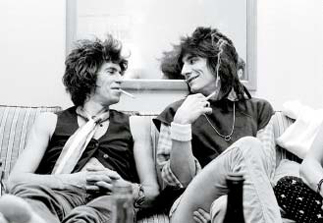 “Ronnie [with cigarette] and Charlie” by Bill Wyman. Provided by Gallery CHA

Oasis isn’t the only British rock band visiting Korea this month. The one and only Rolling Stones are in Seoul as well.

You won’t be able to see Jagger and Co. performing live on stage, but there’s still a chance to get closer to the band.

Gallery CHA, located in Jongno, central Seoul, is holding a rare exhibition called “stART me up! Art Inspired by the Rolling Stones.” Most of the pieces displayed are owned by Kariem Hamed, a Dutch collector and an avid Stones fan. The other items are from the Yoshiko Matsumoto Gallery and VIP’s Gallery, both located in the Netherlands.

Memorabilia like photographs, posters, handbills and even a paper bag will be on display. You’ll get to see some extraordinary pictures taken by photographers like Annie Leibovitz, Michael Putland, Jim Marshall and Gered Mankowitz who have toured with the band.

And that’s not all. Former bassist Bill Wyman, who has also established a name for himself as a photographer, provides a glimpse into the band’s life backstage. His photographs portray images that can only be caught by those who have intimate access. One of his shots show guitarist Ronnie Wood and drummer Charlie Watts smoking and drinking beer, grinning mischievously at the camera.

Wyman isn’t the only one in the Stones clan with artistic flair. Wood is a recognized artist in his own right. The stART me up! exhibition shows four pieces by Wood, including a lithograph of guitarist Keith Richards and Wood’s dog in Ireland called “Keith & Chanel.”

Posters to promote the band’s tours are also an interesting part of the exhibition. Visitors should take special notice of the “Trick or Treat Poster” made for the 1994 “Voodoo Lounge Tour.” The caricatures are drawn to show distinctive features of each Stones member. The items in the trick or treat baskets they’re holding tell their respective traits. Tour stickers are displayed as well, including those by John Pasche who created the “Tongue and Lip Design” for the Stones in 1971.

The exhibition takes visitors through the band’s history, from the 1960s to the present. Voices may have grown husky, and hair may have grayed, but the portraits show how the Stones’ passion for music has remained young over the years. Jagger’s frontman antics, his face scrunched up for the high notes, still attracts fans of all ages.

Because most of the pieces belong to Hamed, they are rarely displayed in public. If you’re a Stones fan, you probably don’t want to miss this chance.