Spring flowers on a seaside mountain

Spring flowers on a seaside mountain 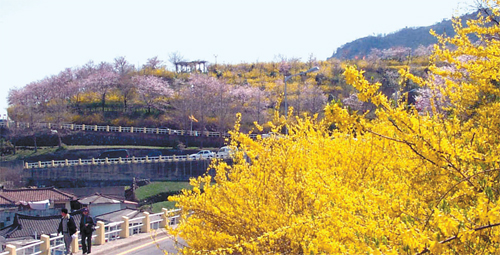 Every April, forsythia blossoms form a canpoy over Mount Yudal in Mokpo, South Jeolla. Provided by the Mokpo government

The golden blossoms of the bell-shaped forsythia are well-known messengers heralding spring’s arrival.

Though it feels like spring is not quite here yet due to the capricious weather of recent days, one place where you can feel that spring is in full bloom is Mount Yudal in Mokpo, South Jeolla.

The mountain and surrounding area will play host to the “Spring Flower Festival” this weekend for three days starting tomorrow. The mountain and neighboring areas are known for the forsythias that emerge every spring to blanket the region in warm shades of yellow.

But before you take in the festival, take a walk up to Mount Yudal, the entrance to which is a 20-minute walk from the plaza of Mokpo Station. The mountain is rather low, 228 meters (748 feet) above sea level, making it accessible even to inexperienced mountain climbers.

Yudal Mountain is composed mainly of granite and offers a fantastic view of rock and stone formations in various strange and wonderful shapes. From the top of the mountain, visitors are treated to a breathtaking view of Dadohae, an archipelago. Dadohae literally means “sea of many islands” in Korean.

Near the entrance of Mount Yudal, there is a huge stone called “Nojeokbong” and a statue of Admiral Yi Sun-shin of the Joseon Dynasty. Yi covered the stone with straw to get Japan to think Korea had more provisions than it did during the Imjin War (1592-1598) between the two countries.

From there, walk five minutes and you will find Opodae, a cannon built in 1909 that was fired at noon to mark time. The cannon is a replica of the original, which can be seen at the observation platform in Mount Yudal Park at the foot of the mountain. The cannon was designated Cultural Property No. 138 by South Jeolla Province.

Mount Yudal has a number of pavilions, including Daehak-ru, Dalseon-gak, Yuseon-gak and Gwanun-gak. The first pavilion, Daehak-ru, is next to Opodae and you can delight in a spectacular view of the Dadohae archipelago from there. Nearby, there is another pavilion called Dalseon-gak, which overlooks a panoramic view of Mokpo.

At the top of the mountain, visitors are rewarded with photogenic views of the jade-colored Dadohae and the city of Mokpo. If you visit as night falls, you can see the red sun setting above the blue sea.

On the way down the mountain, follow the 2.5-kilometer road encircling the mountain. The path is decorated with row upon row of forsythia, magnolia and maehwa (plum blossom) trees. This is where the Spring Flower Festival will be held. 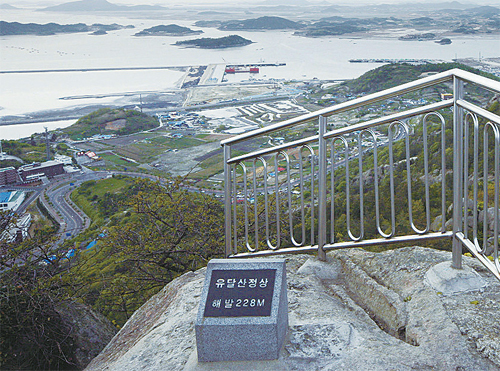 A view of Dadohae, the “sea of many islands,” from Mount Yudal.

The festival will be accompanied by a variety of events, including a special concert and a performance of the Nojeokbong Ganggangsullae, a Korean traditional dance that was used by Admiral Yi to disguise Korea’s low troop numbers from the Japanese.

Mokpo has maintained a number of vestiges of Korea’s modern period, many of which are province-designated cultural properties. Mokpo Modern History Museum, located in Jungang-dong in the old city center, was originally the Mokpo branch of the Oriental Colonization Company established during Japanese colonial rule (1910-1945). 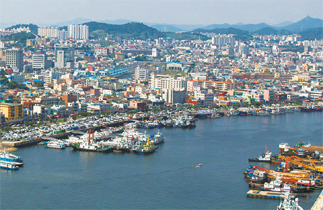 Another attraction is Yihundong Garden in Yudal-dong. It is the largest Japanese-style garden in the southwest of Korea (South Jeolla Province-designated Cultural Property No. 165).