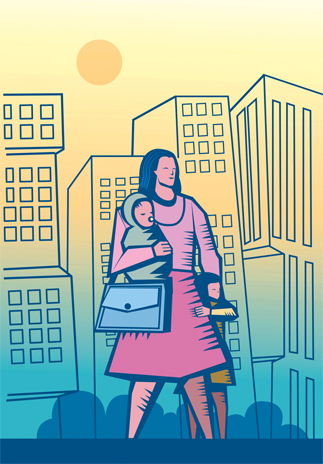 She might not have much money, but she still has her son.

Despite deeply embedded prejudice against unwed mothers in Korea, Kim, 36, decided to keep her child after she broke up with her boyfriend.

“I’ve met mothers who gave up their children for adoption and they said they suffered from a sense of guilt later in life,” said Kim, who only wanted her family name used in this article. 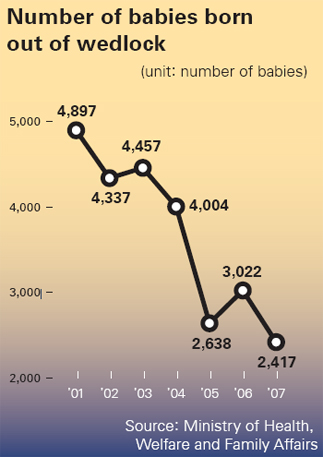 Born in Hapcheon, South Gyeongsang, Kim was raised by her grandmother from the age of two after her parents divorced.

She has not seen her biological mother since middle school and she said she wishes her mother had been there for her while she was growing up.

To make a living, Kim makes ceramics and natural soap, and she recently took a course on natural and organic cosmetics.

“I never have enough money but I felt that it would be better for my son if I raised him,” she said.

Life is tough but it probably would have been a lot harder without the support of Aeranwon, a Presbyterian Church institution in Seodaemun District, western Seoul, founded in 1960 by American missionary Eleanor C. Van Lierop initially to protect runaway girls and female prostitutes.

Aeranwon runs a center in Seodaemun District that accommodates up to 40 unwed pregnant women and their children.

The name of the organization means “implanting love in people” and it was the Korean name of Van Lierop when she lived in Korea.

The group provides career counseling plus advice on adoption and living as an unwed mother in Korea.

Since 2004, the organization has seen a 58 percent rise in the number of unwed mothers using its facilities who decide to keep their children.

Many of these women, termed “unwed” to differentiate from “single” mothers who might be widows or divorced, have been rejected by their families.

Strict Confucian values that determine family structure in Korea make no allowance for women who choose to keep their children.

When pregnant women, most of whom are usually in their 20s, go to stay at the center during their pregnancy, they are given a chance to consider whether they should keep their child or not.

Before making a decision, they are given a thorough overview on what it would take to rear a child as an unwed mother in Korea.

They are also given information on adoption. According to Aeranwon, 48 of the 59 unwed mothers who gave birth at the institution in 2007 chose to keep their child.

The women can stay at the center for three months after their child is born and then Aeranwon arranges for the unwed mothers to be transferred to a nearby mother-child center, also run by the Presbyterian institution, where up to 14 women and their children can stay for up to 18 months.

There, some receive vocational training while others go to school to finish high school. The center also provides advice, support and guidance for parenting.

Kim left the house three years ago and now lives with her 6-year-old son in an apartment provided by the institution.

The counseling aspect that Aeranwon offers is crucial to helping the women adapt to life with a child but no husband.

“Some unwed mothers think they can return to a normal life if they give up their child for adoption, but they have to live with a sense of loss and guilt,” said Han Sang-soon, the director of Aeranwon. “And for those who choose to keep their children, as soon as they walk out the door at Aeranwon, they are faced with the start of a crisis.”

One of the biggest problems the women will face, though, is making ends meet. Even if they’ve had job training, most of the mothers get stuck in low-paying jobs and it is often difficult to keep cash coming in.

It is often the case that unwed mothers have nobody they can rely on because they can neither go back home nor ask for help from their child’s biological father.

According to Han, most unwed mothers are from broken families or cannot return home because of a stigma against single mothers. For whatever reason, they have usually separated from the child’s father by the time they enter Aeranwon.

“This is why unwed mothers need a place to stay,” Han said.

According to a survey of 308 single mothers between 2001 and 2004 by Aeranwon, unwed mothers who stayed at the institution ran away from home at age 13 on average and became pregnant at age 16. Most of them could not finish high school. Soon after giving birth for the first time, they became pregnant again.

“They need someone who can protect them while they are wandering the streets. They often end up finding themselves with strangers, mostly men,” Han said. “As soon as they become pregnant, they are abandoned.”

Historically, the problem for unwed mothers had been stigma and prejudice, but another more subtle challenge has been the legal standing of unwed mothers and the places where they stay.

While there have been significant improvements in the facilities offered to unwed mothers - there are now 15 mother-child centers in the country for these families - prior to 2007 most shelters for unwed mothers couldn’t accommodate children, since most of the women are expected to give up their kids for adoption.

Han’s argument appears to be backed up by what unwed mothers say is a flaw in the welfare system.

Any Korean earning less than 840,000 won ($602) a month can get government subsidies equal to the difference below that amount. So, a person earning 500,000 won is entitled to 340,000 won in subsidies. In addition, they do not need to pay medical bills as long as they are covered by national health insurance.

The flaw, according to unwed mothers, is that if they make more than 840,000 won a month, they lose these medical benefits. Instead, they only get 50,000 won a month from the government, financial support given to single parents with children under age 10.

Kim said to keep their welfare status, many mothers choose to stay out of a “real job” and work part time so that their income is not exposed.

Single mothers said this is unfair because they are getting less help than the amount adoptive parents receive from the government.

Those who adopt a child receive 100,000 won a month regardless of their income. The government covers all medical bills for adoptees as long as they have insurance.

“If the government wants to deal with the country’s low birth rate and help single mothers raise their children, they should first support single mothers, then adoptive parents,” Han said. “Adoption is not the best solution for children born out of wedlock.”

Han strongly believes that bias and prejudice against unwed mothers and the social problems that evolve from teenage pregnancies can be reduced if the government provides greater financial support.

Han said, quoting Cheryl Mitchell, former deputy secretary of the Agency of Human Services in the state of Vermont, U.S., that the number of teenage pregnancies has been reduced ever since the state began running mother-child centers. Similar support has led to a drop in the number of babies given up for adoption in Australia, Han said.

However, a government official defended current policy. “Adoptive parents are raising children who are not their own,” said a family policy deputy director of the Ministry of Health, Welfare and Family Affairs, who declined to be named. “That’s why the government is giving them more support.

“Besides that, it is not possible to provide single mothers with everything they need. That means we have to pay more taxes,” he said.

But while laws can be changed and training can be provided, overcoming deep-rooted prejudice is a challenge for which there is no pat solution.

Kim, who now lives with her 6-year-old son, didn’t tell her family that she has had a child until two years ago. She finally informed them because she thought her son needed relatives.

“I came to realize that my son has no relatives he can visit. I felt sorry for him. My love wasn’t enough for him,” Kim said.

She and her son have visited her relatives in her hometown several times but their reaction has been aloof.

“They’re not as affectionate to him as they are to other kids,” said Kim, explaining that she’d overheard her relatives saying she shouldn’t be allowed in the house because she was an unwed mom.

Even more hurtful is her family still suggests that she could put her son up for adoption.

“It is difficult to live as an unwed mother in our society. If I were a divorcee with a child, it would have been a lot easier,” she said.

And as her son gets older, she knows there will be more pain to endure. She’s afraid her son will have to face prejudice at school. There are plenty of anecdotal stories concerning parents not wanting their children to play with the kids of an unwed mother.

Despite the difficulties, Kim has no regrets. “My son is adorable and I get huge amounts of joy raising him. Nothing can ever get in the way of my love for my son.”