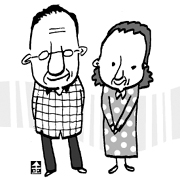 There is a song Koreans sing on Parents’ Day, with the lyrics “Mother forgets all the pain she had when she gave birth.” The song describes the hardship that a mother goes through in childbirth and in raising her children. The lyrics are similar to the “Sutra of Kindness of Parents,” a book that is a legacy of Buddhist tradition.

The book describes many acts of kindness that parents do without hesitation. A mother finds a dry, warm spot to lay her baby down, wrapped in a quilt, even if she has to lie down on a cold, damp spot. Parents are concerned about the safety of their children all the time and try their best to keep them safe throughout their lives.

Parents feed good food to their children, while denying themselves. The Buddha Sakyamuni teaches that it is really difficult to pay back parents’ deep and endless love and care. We need not look into Buddhist texts to recognize parental love. Anyone with any sense understands that it is impossible to measure a parent’s love.

Mozi, an ancient Chinese philosopher, maintained that if we respect others’ parents as we do our own, we can easily achieve and sustain peace in the world. Mozi promoted tearing down the barriers between “you” and “I.” His philosophy can be regarded as the root of philanthropy in the Eastern world.

Mencius, who learned from Confucius, criticized Mozi’s ideas. He maintained that Mozi encourages others to deny their own parents.

Mencius argued that one who does not respect his own father and his king is like a beast. He believed that one must respect and take care of one’s own parents first before respecting others’ parents. Instead of feel-good philanthropy, one must begin with loving and caring for one’s own family. Love will then spread to others, according to Mencius.

In reality, Mencius’ arguments are much more persuasive. But Mozi’s thoughts cannot be underrated as the Eastern world has maintained a family-oriented system for more than 2,000 years while has long been immersed in the idea of taking care of only one’s own family first.

Although Mozi’s philosophy was pushed to the side by Confuciuan thought, he was a serious philosopher who promoted philanthropy, which is a rare thing in Asia.

These days, many Koreans call older people “father” or “mother” even though they are not actually related. The honorifics imply that one regards someone else’s parents as their own. TV presenters first used these forms of address and now it has become widespread in society.

Some people think it is too much to call unknown people father or mother. But it is good when we think that Koreans are usually unwilling to shrink the space between themselves and others. It will be even better if one means it when he calls someone mother or father. That can be the start of building a community where both you and I are happy at the same time.