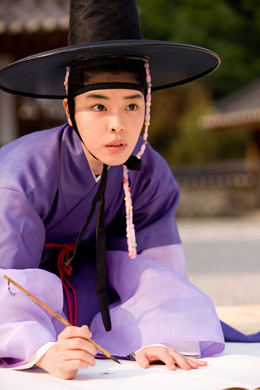 Of the many cultural trends that emerged in Korea last year, two that provoked considerable discussion were the national obsession with Joseon-era painter Shin Yun-bok and an upsurge in steamy sex scenes in Korean cinema.

By watching Jeon Yoon-soo’s “Portrait of a Beauty,” a film that combines both these elements, you get to see what 2008 was all about ? just in case you missed it.

Beginning with the publication of “Painter of the Wind,” the novel that took artistic license with the premise that perhaps the painter had really been a woman, Shin Yun-bok mania went into overdrive with the top-rated SBS drama of the same name.

After her brother, who was being groomed to enter Dohwaseo, the royal institute for painters, kills himself, Shin is forced by her father to restore the family into the yangban class by becoming a court painter. But because this is the Confucian Joseon Dynasty, she must disguise herself as a man.

The tangled period piece proceeds in an interesting but typical fashion. Shin grows into a gifted artist, has a sexual awakening and falls in love with the ssireum-wrestling potter Kang-moo (Kim Nam-gil), which drives her mentor Kim Hong-do (Kim Yeong-ho) jealous because he, too, has fallen in love with his protege. Avoiding the all-too-cliched love triangle however, the film adds a gisaeng with a heart of gold into the mix, who tries to woo Kim, before it ends in tragedy with a dramatic death.

Ultimately, the sex scenes are fitting for a film that depicts an artist who was pushing the envelope himself (or herself) by painting rather risque scenes for that age.

The visual storytelling is what makes the film watchable, with gorgeous costumes and stunning cinematography succeeding when the plot and acting fails to inspire. Unfortunately, the DVD’s English subtitles are also poor. Expect such lines as “How dare you bring deceive me” to detract some of the gloss from your viewing experience.