[Talk of the town]
Madonna wants to adopt again 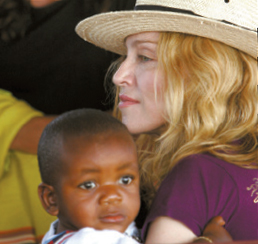 Pop icon Madonna, 50, is planning to adopt another child from Malawi, according to Associated Press. The U.S. singer, who already has an adopted son from the southern African country, reportedly filed an application to adopt a 4-year-old girl this time. The Malawian girl’s name is Chifundo, or Mercy James. Her mother is said to have died soon after giving birth, while her father barely maintains contact.

Last Sunday, Madonna and her three children arrived in Malawi and visited the Mphandula Day Care Centre, a facility for orphans that is supported by the pop star’s charity organization, Raising Malawi.

But not everyone is happy with Madonna’s decision. A coalition of humanitarian organizations and child advocacy groups gathered in Malawi’s capital Lilongwe to criticize the singer. Stressing that adoption should be a last resort, they argued that children need to be taken care of by their own relatives, pointing out that Mercy James has an uncle. They also expressed strong concern about the adoption being fast-tracked due to Madonna’s money and status.

Despite the controversy, fans of the singer have shown their support, maintaining that Madonna will provide advantages and opportunities the child would not be able to have otherwise.

The Malawian court has delayed a ruling on the case until Friday U.S. time. Madonna has not yet released a public statement on the issue.