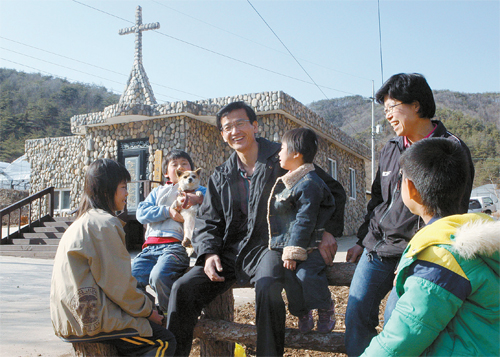 Pastor Yun Ik-sang and his wife Lee Myeong-ja with their foster children in front of a church in Yeongwol County, Gangwon. By Kim Kyung-bin

A constant runny nose plagued the baby boy, who looked like he’d never had a haircut. The social worker who had brought the 10-month-old child to the home of Yun Ik-sang, a 48-year-old pastor, said the problem was rhinitis.

The social worker handed the pastor a bag containing three diapers and a half-finished bottle of baby formula. She said the child’s mother had handed Yeong-su (not his real name) over to the foster care organization and would come back for him when her situation improved. 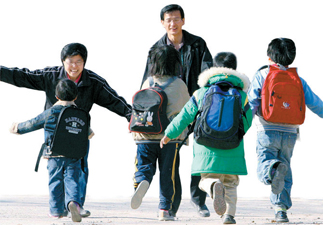 Yun and Lee greet their children after school. There are only 10 pupils in total at the village school.

Yeong-su bawled when the social worker left even though he had only been with her for a few hours. He cried when the pastor’s wife, Lee Myeong-ja, changed his diaper and he didn’t settle down until he’d finished off his bottle.

He finally fell asleep in Lee’s arms as she walked around the small farm she and her husband run in a small village called Yeondeok-ri in Yeongwol County, Gangwon. 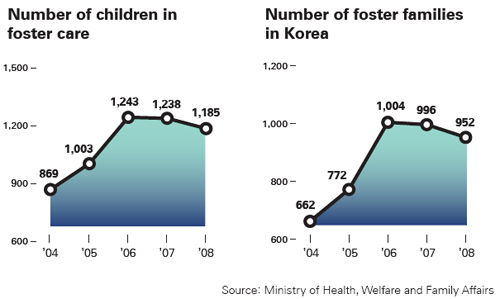 Yeong-su was the first child the pastor and his wife took in as foster parents. That was six years ago, and now four of the 10 students at the local village school have been fostered by the middle-aged couple.

The couple, who has a daughter of their own, has provided foster care for seven children so far.

Their story as foster parents began in October 2003 when they got a call from the Korean Foster Care Association, an organization they had signed up with the year before. They were told there was a 10-month-old boy waiting for foster care.

When they got married, they set a lifetime goal for themsleves: to help the underprivileged. They decided that their best option would be to move into a rural area and help the elderly and children.

In Korea, many villages in the countryside were suffering from depopulation as young people migrated to the cities to look for better paying jobs. Some couples left their children with their parents, and Yun and Lee thought they might be able to help.

So in the summer of 1999, they moved to Yeongwol County, a remote mountainous region of Gangwon. They built their own four-room house and a greenhouse for growing vegetables. Yun worked on the farm during the day and studied farming at night, falling asleep in the warmer weather with the windows open.

As they developed their farm, they realized that the countryside was the perfect place to raise children, and they looked into ways to become foster parents. They had heard about the Korean Foster Care Association, which focused on finding families for children whose parents could not look after them in a home environment rather than in an a state institution.

They initially thought it would be easier to raise a 5- or 6-year-old girl than a baby, so when Yun got the call from the foster care organization in October 2003, he was reluctant. He felt it would take forever to raise the baby and he hesitated to take on the responsibility. It was his wife, Lee, who eventually brought Yun around, firm in the belief that Yeong-su should be part of their life.

But that was just the start of things. Two weeks later, the association called the couple again with news that three brothers who weren’t attending school needed foster care. Their parents were divorced and their father was heavily in debt.

The couple couldn’t refuse, and a few days later, Hyeon-su, Chang-su, and Cheol-su (not their real names) came to stay in the house that Yun and Lee built. The couple certainly felt the boys’ presence as they ran riot around the village.

Hyeon-su, the eldest, was a sweet boy and offered to help his foster mother carry heavy bags and work in the fields belonging to the farm.

Chang-su, the middle child, was smart, representing Gangwon Province in a rubber-powered airplane competition and coming first in a spelling bee in Wonju, Gangwon.

The youngest, Cheol-su, was a good runner, taking part in a relay race with his foster mother on sports day.

The brothers were very grateful to their foster parents, giving them gifts on their birthdays and working on the farm after school. But their life together came to an abrupt end in the fall of 2008 when the brothers’ biological father made an unexpected appearance and said he wanted to take his children home. He had found work, remarried and was prepared to take care of his kids.

Lee and Yun were devastated.

“It was more heartbreaking than when my own child left home [for work],” Lee said.

“I can visit my child if or when I want to, but I’ve not seen the brothers since they left. I always knew these children were going to leave someday. But the pain of separation was unimaginable,” she said, wiping away the tears.

However, the couple did not have to worry about filling the empty space left by the three brothers. On the same day, three sisters came.

“Please take care of them for ten years,” said the father, who allegedly beat the girls. The girls’ mother suffered from alcoholism and left the family in 2007.

Two of the girls had speech impediments and learning problems. They all had head lice and dental problems.

Yun and Lee quickly arranged for a speech therapist to work with the children and made appointments for them to see a dentist with the help of a charity foundation in Jeongseon County, Gangwon.

Lee also spent many hours teaching the girls how to read and say words properly, writing vocabulary on a whiteboard in the kitchen at home. As the weeks and months passed by, the girls began to communicate more.

Meanwhile, Yeong-su started going to an elementary school this year and their biological daughter, Hee-jin, found work as a social worker in Ansan, Gyeonggi.

“Are you going to live with the poor, too?” Lee asked her daughter on a recent visit.

“No, I won’t live like you, mom. I will help them during the day as a social worker and go home in the evening,” Hee-jin replied.

Lee caressed Hee-jin’s head while she was talking. Yeong-su was sleeping on Yun’s lap.

In front of them, the three sisters were playing cards and outside the stars were clear in the sky.