A pie for our Muslim friends

A pie for our Muslim friends 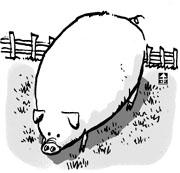 The New York Times reported on April 2 that there was opposition from the conservatives against the appointment of Harold Hongju Koh, the Korean-American dean of Yale Law School, as the legal adviser at the State Department.

They found a pretext from something Koh said about shariah, or Islamic law. Shariah has rules on what to do and what not to do in many different areas, from everyday life to investment and business management.

There is even a rule that Muslims are not allowed to eat Choco Pies, a very popular Korean chocolate snack, because of the gelatin in them. The sticky gelatin ingredient for baking is extracted from pig skin, and pig products are a great taboo for Muslims.

However, it is difficult for one person to know the ingredients of all the different foods, so the Islamic association of each country makes a list of foods that are acceptable under the rules for Muslims. This approved food is called halal food. Internationally authorized halal food is a $580 billion industry. Even the Korean Islamic association began announcing its list of “Korean snacks that are O.K. to eat” last month.

Halal means “permitted” in Arabic. In terms of meat, Muslims are not allowed to eat pork, blood or the meat of animals that have been beaten to death. Even permitted meat is only acknowledged as halal if it has been slaughtered according to Islamic law.

Why is pork a taboo? According to American anthropologist Marvin Harris, it is because of the barren desert environment. The best livestock for nomads are lambs, which can grow on just grass, whereas pigs have to share grain with people, and they provide no additional resources such as milk or fur, either.

Therefore, he explains, the tactic of not wasting resources by raising pigs, considered a luxury, turned into a taboo.

Ultimately, there is a cause for any taboo based in the historical standards of the society that gave rise to it. Ignoring such taboos has sometimes even led to bloodshed.

The Sepoy Rebellion in India in 1857 was a tragedy that resulted from the arrogance of the ruling British forces, who belittled Hindi and Islamic taboos. It is only natural that Islamic clerics are indignant at U.S. conservatives who mock their culture, but their attitude reminds us that a refusal to understand another culture can lead to tragedy.

Understanding halal can lead to money, too. Arabic-speaking people loved the Korean TV drama “Daejanggeum,” and this encouraged the Korea Tourism Organization to employ a Muslim model at the end of March to star in a promotional video for Korea with information on restaurants that serve halal food, hoping to actively attract Arabic-speaking tourists. What if we take this opportunity to make halal Choco Pies that contain gelatin extracted in a different way?