A journey back to childhood with Enid

A journey back to childhood with Enid 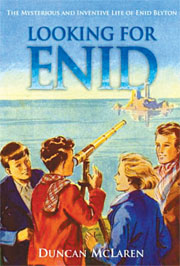 Enid Blyton is the one of the most popular children’s writer of all time and had an enchanting command over children’s literature for many years.

She brought us the Noddy, The Famous Five, The Secret Seven, The Wishing Chair, The Enchanted Wood and The Magic Faraway series.

A genteel, elusive character herself, Blyton, who was born in 1897, produced such a flurry of fiction around her that details of her own life are all but forgotten. Yet she wrote around 800 books and sold an estimated 400 million copies worldwide.

And so, biographies such as “Looking for Enid: The Mysterious and Inventive Life of Enid Blyton” by Duncan McLaren provide insight into the motives and imaginings of a hitherto poorly examined life.

Blyton, bless her, has been gone for some 40-odd years now, but McLaren’s book suggests she is as revered and cherished an author as ever.

The biographer is candid with his readers, quickly confessing to have had various failed literary endeavors and sets himself up primarily as a fan.

His rediscovery of Blyton began when he stumbled across a dusty copy of Noddy in a book store.

Flushed with childhood memories, moved by the smell of the old pages, the quaint and colorful drawings, the delicate language and the adorable characters, McLaren vowed find out more about the novelist who was so adept at exciting children’s imaginations.

The product, of course, is this book. If his objective was “Looking for Enid,” he has managed to capture fragments of her existence, but somewhat like the lands atop the Magic Faraway Tree, his insights are fleeting, all but gone as soon as he rests upon them.

The book is in danger of being dominated by the personal pronoun; indeed it is a very personal journey through which the presence of McLaren is constantly felt. Personal recollections, his own childhood stories and his first-person perspective verge on being too much at times.

All one can do is recognize in him the same childish adoration many readers, myself included, felt reading Blyton’s books. (If you don’t know who Blyton is, I implore you, get your hands on a copy of the Famous Five or Wishing Chair series. They are every bit as delightful for adults as they are for children, if read with an introspective sense of irony.)

One of the most enjoyable things about Looking for Enid is the real, palpable sense of how clearly Duncan McLaren is enamored with his subject. This is not an impartial biography; it is a chronicle of someone’s life according to their own retelling, an adult author searching for any details he can grasp about a woman who introduced him to literature as a boy and who spun him delicious tale after tale until he had trained his mind to envelop all things magical and imaginary.

Excerpts of her writing, accompanied by darling little illustrations add to the charm of this book, and give readers a break from McLaren’s own observations.

Reading this is like watching someone try to coax a story from somewhere dark, somewhere hidden. It is a road trip of childhood curiosity and scholarly interest, and for a longtime Blyton fan who still reads The Magic Faraway Tree despite burgeoning adulthood, it was a real pleasure to go along for the ride.

I also have a pleasant sense of triumph on Blyton’s behalf that so much of her life and personality is still a mystery.

I imagine she had every intention of her own life being consumed by her sprightly, impish characters and their incredible adventures.

Incidentally, the British actress Helena Bonham Carter (“Harry Potter,” “Sweeney Todd”) is going to portray Blyton in a forthcoming BBC film about the author’s life, which will be screened in the U.K. later this year.

It’s the first time Blyton’s life has been turned into a movie.

Looking for Enid: The Mysterious and Inventive Life of Enid Blyton