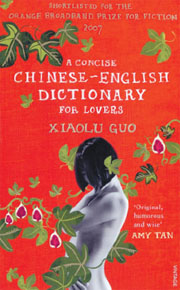 About six months into my fellowship here in Korea, the executive director of my program paid me a visit. And when she posed the question, “So, how’s your Korean?”, I had to be honest about my less-than-diligent approach. Her response?

“We need to get you a Korean boyfriend.”

Crossing the language gap via the bridge of love is the subject of “A Concise Chinese-English Dictionary for Lovers,” a novel written entirely in the gradually improving “Chinglish” of Z, a 23-year-old Chinese woman in London studying English for a year.

The novel, as its title suggests, is structured as an annotated, chronological dictionary of words that Z jots down through her language study and a fast-paced relationship with an older Englishman. The two basically fall into each other, barely developing their romance before they begin living together. Considering the two are near strangers who can barely communicate, the reader is left questioning their judgment - and that of author Xiaolu Guo.

Month by month, Z expands upon her vocabulary through everyday life, titling her chapters after new words such as “alien,” “discord” and “nostalgia.” But the chapters often end up quite short, some not even a full page, and create some unnatural phrasing within the novel.

At one point, when Z matter-of-factly states that she read her lover’s diary while he was out of town, he explodes at her. The fight exposes her total unawareness of the Western idea of privacy - she doesn’t even understand she’s done anything wrong - thus introducing her to a new concept.

But when Guo interrupts the fight to start a new chapter titled “privacy,” followed by its definition, she creates a narrative gap in the action of the lovers’ squabble, after which the dialogue awkwardly resumes.

The short chapters and imperfect English present stumbling blocks for the reader, making the book a bit of a slog. And after such patient perusal, the ending brings too little reward.

Guo does manage to find authenticity in the emotional despair of an unraveling cross-cultural romance. “You are afraid of being lost, but I am the person in the relationship being lost first,” she writes. But it’s an expected sentiment, one that’s grown hackneyed in all its examination in prior works.

I recently had a conversation about the possibility of a novel written in “Konglish.” Lucky for any writer exploring that realm, Guo hasn’t beaten anyone to the punch.

Rather than being an important, groundbreaking addition to the literary canon, the book falls short of plumbing any emotional depth. It’s basically chick-lit. But real expatriate life is full of rich, buried content that much of the Western world has yet to encounter.

Just as Asia poses all sorts of perplexities for Westerners, the converse can likewise be true through an Asian lens - one that shows more than some trite tryst.

A Concise Chinese-English Dictionary for Lovers