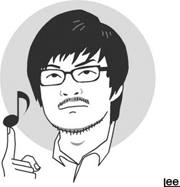 If the name Chang Ki-ha sounds unfamiliar, you may not be entirely in tune with the Korean entertainment world.

The 27-year-old underground singer’s first album has sold 30,000 copies since its release in February, groundbreaking for the independent label world where sales of 1,000 copies is deemed a smash.

The newcomer has already picked up three popular music awards.

“I drink cheap coffee/ It has gotten cold and upsets my stomach/ My feet stick to the damp floor and leave a print.”

His hit song “Cheap Coffee” then continues, “Don’t know how old that water in the bin is/ It must be rotten stinky/ But my senses have been long dead/ … Can’t tell whether the damp floor is me or I’m it.”

With that song Chang has become the pinup of the so-called “losers’ culture,” striking a chord among the IMF - “I’m a failure” - army in the dark corner of economic hard times.

It is remarkable that middle-aged Korean males in Korea have been drawn to Chang. A man in his late 40s who took part in a Chang fan meeting, hoping to get the artist’s signature together with his son, said, “I started to enjoy music again because of Chang.” A TV producer, also in his 40s, confessed his heart stirred upon hearing Chang’s music.

The generations of Koreans in their 40s and 50s have experienced songs that moved one to tears and remained lodged in the heart. Folk singers Lee Jang-hee and Song Chang-shik, and rock bands Sanwoollim and Songgolmae created a legacy of music that reached beyond gender and generations to linger on with lyrical simplicity and wit.

The loathsome, yet unavoidable weight of life provided the essence and backbone of the songs now forgotten and ignored for more than 20 years by musicians today.

The indie musicians kept that musical spirit alive. They voluntarily embraced and enjoyed the lives of losers. Chang, a social science graduate from the elite Seoul National University, sings, “You don’t want to believe it/ You probably choose not to believe it/ I live deplorably/ … But yet I like my life/ Every day for me is fun.”

If Chang stopped at growling, “There is no exit from the abyss,” his songs wouldn’t have been adopted to such an extent. He is preaching that a unique life of one’s own design can also be durable, fun and enjoyable. Everyone is a potential loser in the world of numerical measurement.

To the weary and languid ears of 40-somethings, Chang’s songs are music of comfort taking them on a sentimental journey to their youth.

Why not ask your son or daughter to download one of Chang’s songs. He or she may be surprisingly amused and pleased to oblige. Then the songs can become another gift, a connection with the younger generations.