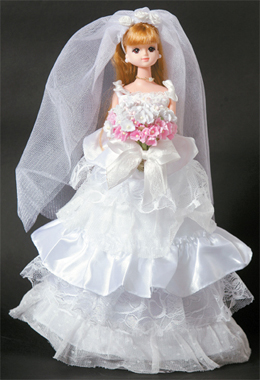 It was a typical Saturday afternoon at Toys “R” Us in Guro, western Seoul.

The store was crowded with fatigued parents and their excited kids bouncing from shelf to shelf, fencing with flashing light sabers, tearing around the aisles in their pedal-powered cars and looking imploringly into the eyes of mom and dad as they passed yet another must-have gadget.

The difference last weekend was dozens of 6-year-old girls were dressed as mermaids running around the store in pink glitter and silver crowns. They were all posing in a special booth with a cute doll called Mimi while their parents snapped away.

Mimi World, the company that manufactures Korea’s homemade answer to the U.S. superstar doll Barbie, was promoting the latest incarnation of its product, Mimi the Mermaid Princess. On this day, the Mimi shelves in the store were impossible to miss - you just had to follow the crowd of eager faces.

Mimi and Barbie, who is celebrating her 50th anniversary, have a great deal in common. Both are pink and glittery and cherished by young girls, but there’s a major difference.

“Barbie is more Western and modern, whereas Mimi seems more Asian, just like a young girl from fairy tale,” said Kim Kyeong-ha, 30, who was browsing the store with her husband and 3-year-old daughter.

That’s hardly surprising. Barbie was originally created in the late 1950s for the U.S. doll market and Mimi was designed in the early 1980s to cater to local tastes.

But there’s one other factor that differentiates the two dolls: market share. 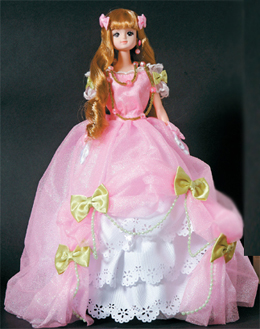 Mimi’s crown
You would be forgiven for thinking Barbie is the No. 1 girls’ doll in Korea. She already holds that distinction in the U.S. and has recorded huge sales all over the world. But figures suggest that Mimi might well have a larger slice of the local market. According to Mimi World, Mimi reportedly had more than 70 percent of the girls’ doll market during the 1980s, and maintains a 30 to 40 percent share.

According to figures released by Lotte Mart, Mimi accounted for 38 percent of girls’ doll sales at Toys “R” Us last year. Lotte signed an exclusive licensing agreement with the U.S. headquarters of Toys “R” Us and opened the world’s largest toy retailer in four branches of Lotte Mart across Korea. Juju, another homegrown girl doll, was close behind with 26 percent.

“Sales of Mimi should be higher at other toy stores, because Toys “R” Us sells more Barbie products than any other toy store,” said Kim Min-seok, a PR official at Lotte Mart. “But what’s interesting is that although more Barbie and other foreign products have become available in Korea because of the new Toys “R” Us outlets, Mimi sales continue to be strong.”

According to Mimi World, sales of Mimi were up about 25 percent last year compared to sales in 2007, despite the economic downturn.

Mattel, the manufacturer of Barbie, declines to release statistics for sales in the Korean market, but the world’s biggest toymaker said in February that Barbie sales worldwide fell 21 percent in the last quarter of last year, which of course included the major holiday shopping season.

The secret to Mimi’s success is sticking to tried and trusted formulas.

“Seasons change and fashions come and go, but you can never go wrong with themes like princesses and brides,” says Baek Jae-eun, the marketing manager of the Mimi World in this reporter’s recent visit to the company in Anyang, Gyeonggi, about an hour’s drive from Seoul.

“We believe it’s important to lower our eye level to that of a child and think about a child’s fantasies, dreams and wishes, and not those of us adults,” she said. Baek is also the editor-in-chief of Mimi Girl, a biannual magazine that contains news about Mimi dolls and other merchandise like coloring books and paper dolls.

Mimi has also reflected trends in society. During the 1980s, she assumed roles like a nurse, artist and ballerina, three of the most popular careers young girls desired back then.

In the 1990s, girls became more interested in makeup and personal grooming, so girls were given dolls whose hairstyles could be modified and whose faces could be made up. At the dawn of the new millennium, fashion-sensitive dolls like tank top and khakis-clad pop star Mimi found their way into girls’ bedrooms across the country.

But whereas her rival Barbie wears clothes styled by the who’s who in today’s fashion circuit like Michael Kors, Vera Wang and Tommy Hilfiger, Mimi continues to stick to her decades-old look: puffy dresses with ribbons, flowers and lace.

“The princess theme is the eternal fantasy of young girls,” Baek said. 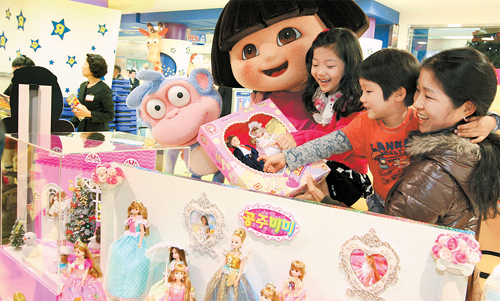 Mimi World holds an exhibition of its dolls from past to present, last December at the Toys “R” Us store in Jamsil, southern Seoul. Provided by Lotte Mart

Several years ago, doll collectors in Korea fell in love with Blythe dolls, strange big-eyed, big-headed toys from the U.S. first made in 1972 and then re-marketed by Japan in 2001.

Online cafes and blogs devoted to the dolls have sprung up, on which Korean doll collectors post pictures of their “babies,” the term they use to refer to their dolls, and exchanging information about adoption, the term for buying. Korean artist Jang Aromi even used the Blythe doll as a muse for her work.

One of the latest stars from Mimi World is Little Mimi, big-eyed and big-headed like Blythe, aimed at a younger market.

“Before our target consumers were girls aged between 8 and 9, but today they’re 5 to 6 year olds,” said Lee Jong-ryeol, a managing director at Mimi World.

“Once they enter elementary school, girls think it’s childish to play with Mimi, but with Little Mimi, they don’t think it’s so childish. So it’s our way to remain in girls’ lives longer.”

All dollmakers have to respond to the kids’ changing lifestyles, and Mimi World said it is planning to launch Mimi stationery and children’s bedding, but it has no plans for making inroads into adult’s brands targeting mothers in the same fashion as Mattel with Barbie, which makes women’s wear and jewelry.

“For now, we’re sticking to the children,” said Baek. “If Barbie is aiming to work top-down to mothers, we will work from the bottom up.”