Photography moves into the mainstream

Photography moves into the mainstream

Photography is rapidly gaining attention in the art world in Korea, which is playing host to the country’s first photo fair, Seoul Photo 2009.

“Photography is undervalued because people don’t appreciate it as an artistic genre,” says Heo Ji-hyun, one of the event coordinators.

But the advent of credit card-sized digital cameras and easy-to-use digital single-lens reflex cameras has increased the number of Koreans using cameras, and photography is gaining wider acceptance as an art form in Korea. In addition, Korean photographers like Atta Kim, Bae Bien-u and Koo Bohn-chang have been getting rave reviews from overseas critics.

“Photography is now in the mainstream,” Heo says. 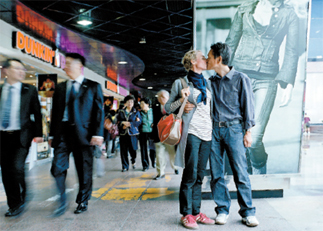 Santa Claus in the Mall by Seo Dae-seung. Provided by the organizer

The photo fair features 1,000 photographs from 400 artists, including works by Swedish artists. Sweden is the featured country at the inaugural fair.

“Swedish artists are not well known to Koreans, but there are many photographers in Sweden. The [fair] will give visitors access to Swedish photos, which are hard to find in Korea,” explains Heo.

The fair will also feature works by a diverse group of photographers, giving people a chance to see the latest trends in photography, Heo added. One of the main attractions will be a new series by famed Korean photographer Koo Bohn-chang.

For those who are interested in investing in emerging artists, Photonet Preview is a section not to be missed. The exhibit features works by developing artists that will be available for purchase at reasonable prices. Works by Korean photographers start at one million won ($756), while photos by the Swedish photographers range from $890 to $2,200.