When kids take over the classroom

When kids take over the classroom

Lee Ye-na (left), a senior student at Hankuk Academy of Foreign Studies, is a volunteer teacher at Wangsan Elementary School in Yongin, Gyeonggi. By Oh Sang-min

Schools normally wrap up before lunch on Saturdays. The classrooms are empty and students and staff have gone home.

The corridors are silent.

But on the first weekend of this month a bunch of elementary students and a couple of high school tutors are busy holding an English class.

“I like winter,” replied Lee Byeong-jun, a fifth grader.

“Why is winter your favorite season?” Lee asked.

“Because I like... um... nunssaum!” said Byeong-jun, hesitating because he wasn’t sure what nunssaum translates to in English.

“I see. What is nunssaum in English? Do you know?” asked the tutor, encouraging the student to work it out for himself.

“Very good! A snowball fight! How about making a snowman?” Lee asked.

“You mean it snows less these days, so it’s hard to make a snowman?”


Cutting back on hagwon 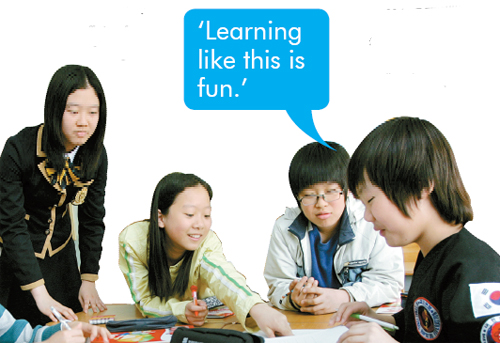 The English class is part of a wider effort to provide better quality English education for students and to cut down on the nation’s extortionate private education (hagwon) costs, some of the highest in the world.

The volunteers are students at Hankuk Academy of Foreign Studies in Yongin who began offering after-school English classes in April 2008 for six elementary schools in the region free of charge. HAFS had been approached by a group of elementary school teachers concerned that their pupils weren’t getting enough English practice.

All the sessions are taught in English and they usually comprise five to seven students. The program, now in its second year, will run until Dec. 5.

Around 300 elementary school students are involved this year, and in return, the HAFS tutors earn community service credit required for college admission.

The elementary school’s English teachers are on standby to help out the student tutors during the Saturday afternoon sessions.

“Students living in rural areas have less education opportunities than those living in the cities,” said Kang Seung-hee, the club’s president and also a senior at HAFS. “We figured the best way to help these students is to utilize our English knowledge, teaching English. That’s how the program was launched.”

So far, so good, it seems, as far as the learners are concerned.

“It’s fun!” said Byeong-jun. “I have more opportunity to speak out in this small class. I usually don’t have that much of chance to speak English in regular class. There’s about 30 of us. But here I can ask all the questions I want. It’s cool to talk to my friends in English, too.”

Lee Jeong-ok, a teacher and also the after-school coordinator at Wangsan Elementary School, said competition to get a place on the program is heating up.

“On the last day of the after-school English class last year, students asked me, ‘We’ll have this program next year, too, right?’ And this year, the competition to join the program was really fierce,” the teacher said.

Over 130 students applied for 40 spots and the organizers had to make space for another 23 to keep everyone satisfied. 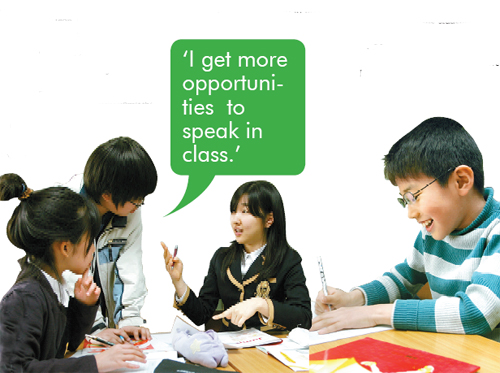 Given the high stakes, the selection procedure has to be completely fair.

Lee said there’s a special policy to manage the program. If a student skips two classes on the trot, she will have to yield her place to a student on the waiting list.

“But no one got penalized last year,” she said.

As part of the regular school curriculum, Wangsan Elementary offers English two hours per week from third to sixth grade. Lee and many other teachers don’t think this is enough.

Lee and four of her colleagues at elementary schools suggested the idea of HAFS students giving English classes for elementary school students. The suggestion became a reality after HAFS Tutor took up the challenge and started to offer the biweekly after-school English program.

Jeon Byoung-uk, a teacher who heads the English department at HAFS, said the program originally began with five elementary schools in Yongin - Wangsan, Pogok, Dunjeon, Mohyun and Neungwon - but this year, the program is expanding to include one more school, Dunjeonjeil Elementary School.

Jeon said HAFS is getting requests from other elementary schools and even some middle schools in the region for the after-school program.

“Our first goal is to expand the program to more elementary schools in Yongin and then reach out to middle schools in the near future,” Jeon said.

With the introduction of the program, Lee and many other teachers believe elementary school students will get more chances to practice the target language.

“Unfortunately, none of the English classes at Wangsan Elementary are taught by native English speaking teachers right now,” Lee said. “HAFS tutors are a great alternative. They have excellent English pronunciation and they provide good examples during the class, which naturally leads students to digest new stuff easily with interest.”

Another plus is the size of the classes.

“Because there are only five to seven students, even smaller than at a hagwon, it’s almost like a one-on-one private lessons for free,” Lee added.

Jeon said all HAFS tutors have teaching experience. They have taught English in community centers as part of their community service before, so they are used to working with others.

Although tutors are busy preparing for college entrance exams, they have to submit their lesson plan ideas by e-mail to Jeon two days before the Saturday class. Jeon, who has a Ph.D. in English education from Korea University, gives feedback on each prepared lesson.

When asked if the teaching job was hampering her schoolwork, Kang the club’s president said, “It’s not difficult to balance schoolwork and teaching.”

She said she uses short breaks such as when she goes to the school canteen for snacks, during recess and even just before she goes to bed to come up with lesson plan ideas.

“Sitting in a chair for a long time rarely guarantees that I’ll come up with decent ideas. Sometimes ideas just pop into my head when I’m taking a quick break,” Kang said.

She said it’s not easy for elementary school students to sit through a class for two hours in full as their a regular period in school lasts only for 40 minutes, but they concentrate well.

“They throw out many questions during class but also through text messages and e-mails. I sense they really want to engage in the class, which motivates me to think, ‘I really want to give my knowledge as much as I can whenever I come to teach here.’

“We know how to approach learners because we’re learners as well. Before class, I tend to think things from the students’ perspective,” added Kang, who is in her second year in the program.

For her, a highlight was the handwritten thank-you notes she got at the end of the program last year.

“Some students used expressions they learned with me during the class. When I saw that, I really couldn’t find words to express my feelings,” she said.

Another tutor, Lee Ye-na, also a senior at HAFS said she has her own teaching style.

“I begin the class in English first, and then explain the same sentence in Korean to help students understand. My priority is to get students more interested in learning English, because that’s how I learned English when I was their age,” she said.

Some students who took the program last year chose to take the program again as they saw an improvement in their English scores at school.

Lee Jin-seon, a sixth grader who took the program last year, recommended that her twin sister Jin-yeong take the program this year. They are taking the class together.

“I gained confidence in English,” Jin-seon said. “I usually got two to three questions wrong in the school English test, but after the program, I got a perfect score.”

But what about hanging out with friends? Aren’t the students studying too hard at weekends?

Perhaps not. It seems the students taking part are enjoying themselves.