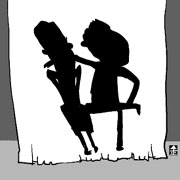 “Madame Kang of the Dressing Room” is one of the most popular sketches these days on the KBS television comedy show “Gag Concert.” Grotesquely and ridiculously made-up actresses take verbal beatings and acting instructions from their seniors. The preposterous costumes and makeup accentuate the innuendo of the backstage power struggle and parody social hierarchy in real life.

Although a selfish, domineering and know-it-all actress, second in the dressing room hierarchy, looks down with disdain on two younger actresses, she instantly transforms into a completely different figure - docile, vulnerable and excessively obsequious - when her senior and mentor, Madame Kang, steps into the dressing room.

On one occasion at the theater, Tolstoy caught a glimpse backstage while trying to get to his seat and witnessed a quite disturbing, yet common, backstage scene. Behind the facade of the curtain, the impoverished, hollow and bitter scene was far removed from the glamorous and inspiring performances that lit up the stage. The rehearsal scenes were even more disturbing, as the conductor railed and cursed the performers and singers.

The stark discrepancy between what’s behind and in front of the curtain - the two-faced realities of art and artists - sent the great thinker to brood over the question, “What is Art?”

The experience inspired Tolstoy to contemplate art’s purpose as being for humans and not for art’s sake. He condemned art based on anger, rage and cruel violence.

The exposure of a presidential aide who sought sexual pleasure from a television starlet who recently committed suicide is an example of the oddities behind real-life curtains.

The case might have been hushed forever if the actress Jang Ja-yeon had not taken her own life and left a note disclosing the names of executives and producers with whom she was forced to have sex, and if the official was not checked by chance at a motel where he enjoyed the sexual bribe.

Business hospitality combines sex and liquor in a private room where the host and guest can immediately forge a close relationship, brought together by a sense of complicity.

It is a well-known fact that the easiest way of doing business in Korea lies in the private rooms of karaoke bars.

We should change this. We cannot have a sane society if our news content continues to require parental guidance. The shameful sexual trade rampant behind the curtains must be thrown off our social stage.