A very merry cherry festival for all

A very merry cherry festival for all 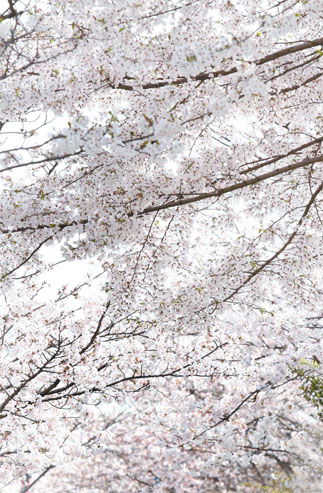 Seoul is erupting in an explosion of pink and white and, hopefully, by the time this article is published, the famed cherry blossom of spring will be in full color.

If so, and we haven’t been hit by a freak hailstorm or unreasonably chilly weather, the Hangang Yeouido Spring Flower Festival, the biggest cherry blossom festival in Seoul, will be the place to be.

Some 14,000 cherry blossom trees line Yeouiseo Avenue, which stretches from Yeouinaru Station to Yeoui 2 Bridge in Yeouido, Yeongdeungpo, which is in western Seoul.

Most are 30 to 40 years old and on average around 2 million people visit the festival, which started Monday and runs through April 18, to ogle the riot of colorful vegetation that transforms the country at this time of year.

This year’s event will be a bit different from previous years. In a departure from the usual pop concerts and loud music that overwhelm the neighborhood, this year’s festival puts flowers back at center stage by expanding the scope of street performances.

Instead of earsplitting tunes, the organizers are putting on a variety of international dance, drama and comedy events to make the festival a more enjoyable experience.

The VIAFestival involves 30 teams and performances from Australia, France, Korea, Japan and the United States. In the past, regional festivals in Korea, including this one, have drawn criticism that they are all the same and have no genuine identity.

Critics have said many festivals established by local governments are a waste of money.

“We wanted to create a real festival we could represent,” said Yeon Dong-yeol, head of the culture and sports division of Yeongdeungpo District Office. “So, we have developed the spring festival into an arts festival rather than just a form of entertainment.”

Visitors to the festival also seem to appreciate a variety of the events that come along with cherry blossoms.

“I’ve come here with my family without knowing there was going to be such performances and it is nice to watch them,” said Kim Si-yeon, a woman living in Mok-dong, western Seoul.

“I think it is a wonderful celebration for spring and a wonderful chance to put Yeouido on the map,” said James Macadie, the general manager of Marriott Executive Apartments Seoul in Yeouido, who came along with Marriott employees to see the festival earlier this week. 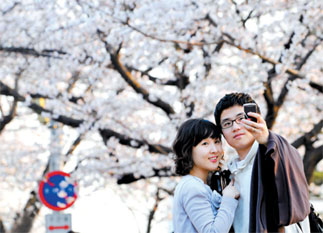 Visitors take pictures in front of the cherry blossom in Yeouido. By Jeon Min-kyu

The cherry blossom trees in Yeouido were planted in the 1960s when the once barely inhabited island on the Han River was redeveloped. The trees were meant to make the surroundings look more pleasant.

Some people might wonder why the cherry trees were planted right beside the National Assembly building despite the fact that the trees are heavily associated with Japan.

Actually, not a lot of people know that the type of cherry blossom trees (Prunus yedoensis) found in Yeouido, and many parts of Korea, are different from the kind (Prunus sargentii) found in Japan.

Many Korean scholars claim that cherry blossom trees originated from Korea, not Japan. But all this history should in no way detract from the joy of the occasion. After all, cherry blossoms are a most welcome sight after the deep freeze of the winter months.

At the festival, you’ll also be able to catch other flowers such as forsythia, azalea, dogwood, magnolia and apricot flowers.

After the sun goes down, the flowers are illuminated to create a memorable atmosphere. 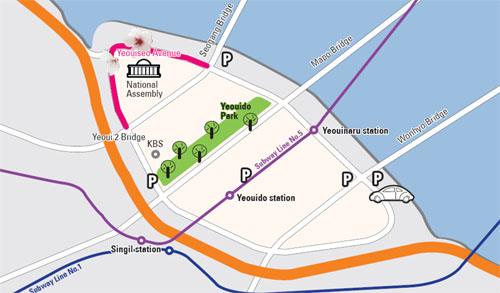