Sisters team up in semi-spooky remake

Sisters team up in semi-spooky remake 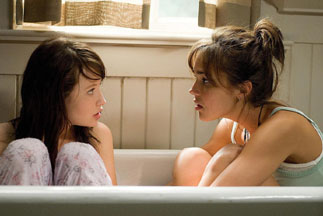 The process of remaking Asian films in Hollywood tends to be a somewhat iffy endeavor. There are resounding successes - like “The Ring” - and then there are those that deflate worse than a ruined souffle - like last summer’s “My Sassy Girl.” “The Uninvited,” an American remake of a Korean film out this week, falls somewhere in between.

The nature of the story - two teen sisters investigating the suspicious circumstances of their mother’s death - is less prone to cultural disconnect than say, a tumultuous romance with the most schizophrenic girl in Korea, as in My Sassy Girl. But for some reason, when adapting the screenplay, inspired by a Joseon Dynasty folktale, the writers failed to take into account a very important aspect of current teenage life: technology.

Cell phones and the Internet are ubiquitous in the United States, even more so in Korea. Just look at teen shows like “Gossip Girl,” which seems to feature as much texting and e-mailing as it does close-ups of its impossibly attractive stars. So when Anna (Emily Browning, who looks refreshingly like an actual teenager) returns home from a mental hospital after recuperating from her mother’s passing, one wonders why she isn’t frothing at the mouth to send her first text message or boot up her laptop.

This thought first crossed my mind when Anna clambers around her house searching for her big sister and best friend, Alex (Arielle Kebbel). If they were really as close as they’re meant to be, they would have been texting back and forth on Anna’s ride home from the hospital. But then again, as those who have seen the Korean original know, that would have never really worked with the surprise ending.

The absence of technology is just the most glaring of many impossibilities that detract from The Uninvited. There’s some shockingly poor dialogue at parts - no joke, Alex actually says to Anna upon reuniting, “Thanks for deserting me!” - and Anna’s unreliable point-of-view.

Although she’s fresh from the hospital, the audience wants to believe that Anna’s cured, but anytime anything scary happens, we find out it’s just one of her vivid visions or nightmares. So while some spooky bits are goosebump-inducing, I just kept waiting for Anna to hurry up and snap out of it. Sisterly love and teamwork are at the fore in this movie, and so when the two girls put their heads together, they decide that the real villain is Rachael (the ever-breathy Elizabeth Banks), their late mother’s hot hospice nurse-turned-daddy’s girlfriend. In yet another example of sparkling writing, one of the sisters shouts indignantly, “She killed mom and she’s not getting away with it!” upon putting the pieces together. Yikes.

True to teenage idiocy, the sisters construct a flimsy case based on little more than a pretty common pearl necklace - which they believe Rachael filched from her last “victim,” based on findings during their one and only session on the Internet.

Such an accusation is almost enough to explain Rachael’s abrupt about-face from Miss Nice Gal to Evil Would-Be Stepmother - but not quite. Instead, we wonder where the heck the sweetie pie from “Scrubs,” “Invincible” and the first half of the movie went. Perhaps we should just chalk it up to the fact that Rachael is the most schizophrenic woman in America?

All things considered, though, The Uninvited isn’t awful compared to other horror offerings. The genre is plagued, especially in the U.S., with plot holes and nonsensical endings. People don’t see horror movies to think; they go for the chills. And despite being a figment of the imagination, some scenes do get the job done.