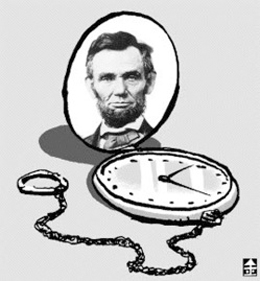 The Smithsonian’s National Museum of American History in Washington, D.C. holds the pocketwatch of the 16th president of the United States, Abraham Lincoln. A legend circulated about a hidden message inside the watch, and on March 11, The Washington Post confirmed the legend was in fact true.

The message, inscribed by watchmaker Jonathan Dillon on April 13, 1861, reads, “Fort Sumter was attacked by the rebels on the above date. ... Thank God we have a government.” Dillon was repairing Lincoln’s watch when the first shots of the Civil War were fired. It is strangely touching to know that the president kept tokens of the people’s patriotism with him throughout the Civil War.

Kim Gu was the last president of the Provisional Government of the Republic of Korea and a leader of the Korean independence movement; he’s also known by the pen name Baekbeom. The Cultural Heritage Administration of Korea has announced that 19 of his possessions will be registered as cultural assets in time for the 90th anniversary of the establishment of the provisional government on April 13.

One of the items is a watch Kim Gu traded with fellow independence activist Yoon Bong-gil right before Yoon heroically threw a bomb at major Japanese figures at Hongkou Park in Shanghai and was caught by the Japanese.

“Baekbeomilji,” Kim Gu’s autobiography, describes the scene on the morning of April 29, 1932, when the great event took place.

“We finished our meal and the watch said seven o’clock. Yoon gave me his watch and said, ‘I bought this watch for 6 won after the oath-taking ceremony yesterday [to coordinate the attack], as you told me. Your watch is worth 2 won, so let’s trade. I’ll only be able to use the watch this one time.’ So I took Yoon’s watch and gave him mine, as a token.”

One person survived and devoted himself to national independence, and one gave up his life, leaving only his name to history.

I’m reminded of another famous watch, although one without such a beautiful story behind it. The former head of the Korea Central Intelligence Agency, Kim Jae-kyu, who murdered former President Park Chung Hee, ordered a $200,000 pure gold watch from the luxury Swiss watchmaker Patek Philippe in August 1979 as a birthday present for Park, two months before the former president’s 62nd birthday on Oct. 26. It’s still a wonder why a person who showed such loyalty turned into a murderer.

It is strange that the stories told by two watches can be so different. One watch represents the country’s faith in national salvation and a strong friendship between two men; the other only shows fruitless human ambition for power and a sudden change within a man’s heart.

I think displaying the two watches together somewhere would offer a deeper lesson from history.