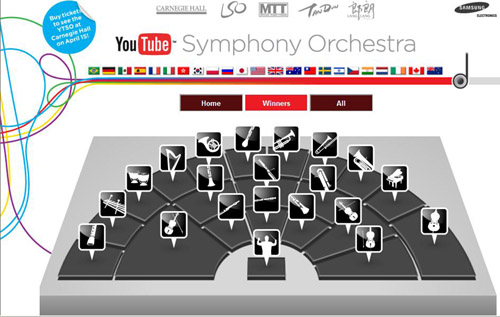 The world’s first collaborative online orchestra, the YouTube Symphony Orchestra, will make its debut at Carnegie Hall in New York this Wednesday.

People wanting to participate had to record themselves playing a 4-minute piece called “Eroica” that Chinese composer Tan Dun had written for the occasion, and another selection from a list, and upload the performance to YouTube. Finalists were selected by a group of renowned panelists, including players in the New York Philharmonic as well as through an online vote by YouTube users.

The winners, 90 musicians from 30 different countries, including eight from Korea, are diverse, not just in their nationalities, but also in their backgrounds, perhaps just as the organizers had intended. For instance, two violin players, though playing the same instrument, looked completely different: one was a German professional violinist dressed in a tuxedo while another was a Korean student in jeans and a Nike sweatshirt playing in a school dormitory.

The music director of the San Francisco Symphony Orchestra, Michael Tilson Thomas, will be directing the YouTube performance.

He said he “wanted to explore the networking aspects of the YTSO, seeing what ages they would be, what nationalities and how these very different people would connect to each other.”

Other watchers point out that this is a good opportunity for the company to attract advertisers to the video site, which has proven not as lucrative as Google had originally hope when it bought YouTube in 2006.

Will YouTube viewers be able to go from Skittles and Diet Coke to classical music? For that matter, will these solo musicians be able to play together when they come from different countries? On Wednesday we may see if music really is the universal language.