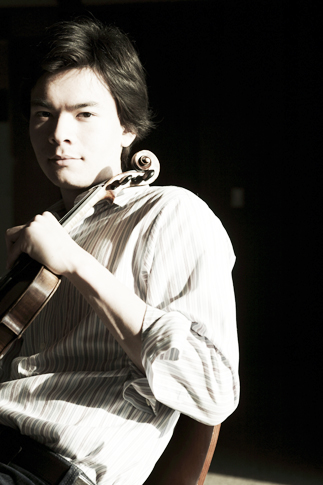 Something magical was happening at the Seoul Arts Center Concert Hall in Seocho-dong in southern Seoul early this month.

The audience seemed mesmerized at how the violinist on stage was interpreting the Mendelssohn concerto. The wide-ranging sounds. The dramatic speed. People looked stunned by this fresh translation of classical music.

Who was this musician with the magnificent bow?

Stefan Jackiw (pronounced Jack-eev) is a rising star in the world of classical violin, and he’s the grandson of the Korean essayist Pi Cheon-deuk who passed away in 2007 aged 97.

Pi went to Jackiw’s first concert in Korea three years ago to show his support.

“It was the first and the last time he ever saw me perform,” Jackiw reminisced.

The 24-year-old Harvard graduate went on to say his grandfather had a profound effect on him.

“I used to talk endlessly about literature and music with him. If I hadn’t been a violinist, I would have been a writer and followed his footsteps,” the violinist said.

But it seems Pi saw a future for his grandson in music.

According to Jackiw, his grandfather used to play classical music for him when he was little. The child must have shown some interest because he was given a violin as a present on his 4th birthday.

Jackiw explains he was lucky that a family friend had outgrown that instrument and could hand it down to him.

During the interview Jackiw emphasized this “luck”’ factor a number of times.

Meeting his teacher Zenaida Gilels in Boston, performing with the Minnesota Orchestra and the Pittsburgh Symphony in 1998, appearing with the Philharmonia Orchestra in London in 2000 were some of the fortunate events he mentioned.

Another stroke of luck Jackiw noted was his first moment on stage as a professional violinist. His music career started off when he debuted in 1997. Boston Pops Orchestra director Keith Lockhart asked him to play the Wieniawski Violin Concerto No.2 on the opening night.

“I remember thinking ‘I don’t want to get off the stage!’ It was a very exciting experience for me. I loved playing music for the huge audience. Even the nervousness was thrilling,” he said.

His love for music is obvious. In the Seoul Arts Center, the audience held their breath as he sent one heavenly tone after another resounding through the hall.

Concentrating all his energy on the wooden instrument, he was deeply immersed in his own musical world. Yet it was clear he was enjoying the tense atmosphere.

And his fans were definitely not disappointed. When the concert was over, many leapt to their feet for a standing ovation, calling him back for encores.

Although the violinist has gone back to New York where he is currently living, he will return in June for a concert as a member of the Korean chamber ensemble, Ditto. He is also scheduled to visit Korea for a recital in December.