The politics of apartment life in Korea

The politics of apartment life in Korea 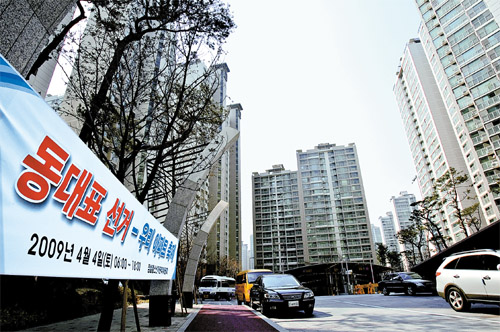 A sign hanging at the main entrance to the Jamsil LLL’s Apartment Complex in Songpa, southeastren Seoul, urges tenants to vote for heads of each of the 70 apartment buildings. By Shin Dong-Yeun

The afternoon of April 4 was an unusually busy day for Jamsil LLL’s, one of five large apartment complexes located in the Jamsil area of the Songpa District in southeastern Seoul.

It was election day at LLL’s, where representatives for each of the 70 apartment buildings within the complex would be chosen. 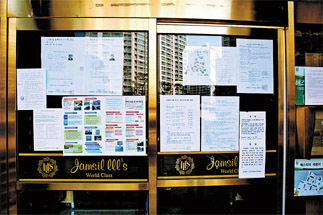 Fliers posted by candidates running for election to the LLL’s Apartment Unit Head Council cover the door of an apartment building. By Shin Dong-Yeun

There are elections such as this taking place in neighborhoods all over Seoul. Though they may look like mere formalities, this is not the case.

The election registered a turnout of 32.7 percent, more than double the amount recorded during elections for superintendents of educational offices across the country in 2008-2009.

The election campaign turned into quite a battle. There were up to four candidates running for 40 of the 70 possible positions. Disturbances reported to the apartment’s electoral commission prior to the election resulted in a couple of candidates being disqualified on charges of distributing controversial fliers defaming their opponents.

“Distributing fliers that are not registered with the commission in advance is considered election fraud,” said Song Chun-ja, chief of the LLL’s Apartment Election Commission.

“It was quite embarrassing that malicious propaganda and groundless rumors were so widespread among candidates with the election approaching,” said a member of the election commission who declined to be named.

Election campaigns and illegal electioneering taking place around apartment complexes? In the eyes of those who are new to this country, the scene described above may seem odd. But it is a reality here, particularly in densely populated residential areas in metropolises around the country.

According to a population and housing survey taken in 2005, 6.6 million households across the country, or 42 percent of about 15.8 million, were living in high-rise apartment complexes in major residential districts. The survey is conducted every five years by the National Statistical Office.

This is a marked shift from the previous preference for living in detached houses, and is closely connected with the baby boomer generation’s transition to family life.

Baby boomers interested in buying housing in the 1980s found themselves in the midst of a housing shortage and soaring housing prices. In response, the government devised a policy for construction of 5 million homes in the 15 years from 1981 to 1995.

To provide such a large amount of housing in such a short period of time, the government engaged major construction companies in large-scale apartment complex development projects.

The large apartment complexes we now see, with most of them in the southern part of Seoul, including Songpa, Seocho, Gangnam and Gangdong, are a result of that policy.

In Songpa District, where apartments in five reconstructed apartment complexes became available last year, 88,600 households out of 150,000 are apartment dwellers, accounting for more than 60 percent of the total.

With so many people living in apartments, interest in the communities within has grown.

“Apartments, which used to be regarded as a way of increasing wealth, are being viewed in a different light,” said Kim Heung-su, the author of the book “How Is Your Apartment?”, which deals with issues related to apartment living.

As interest in quality of life issues has grown, people who live in apartments have become more interested in life within their apartment communities, Kim said.

As a result, people within these communities have begun to take greater interest in who their building representatives are and how they are elected.

“Elections in apartment communities where residents elect building representatives directly is like a litmus test for other democratic institutions, such as local elections,” Choi Ho-jong, head of Solidarity for a Desirable Apartment Community and Culture, said.

The group is a non-governmental organization established to promote apartment community life through various cultural events that encourage apartment residents to get to know one another better.

“However, it is worrisome that apartment elections these days are growing in similarity to political elections, where election fraud and other irregularities are common.

“With more than 40 percent of the people in this country living in apartment communities, it’s time for us to examine how the democratic system within them operates,” Choi said.

This system is perhaps best observed in an area like Jamsil, the site of Seoul’s largest apartment reconstruction project.

The ParkRio complex, for example, has about 25,000 tenants and a budget of more than 2 billion won ($1.49 million) a month, or 25 billion won a year. The money is collected from residents in the form of monthly maintenance fees and the budget is allocated by the apartment complex board, on which the elected building representatives sit. The greater the budget, the greater their influence.

The board also oversees various for-profit projects within the apartment community, which range in value from millions to billions of won.

This system is repeated at apartment complexes around the country. With so many households and so much money involved, there is a lot at stake and the building representative campaigns tend to get heated. In one instance, the National Election Commission had to step in to preside over one such election.

In January 2007, the election campaign for 16 building representatives at the Chowon Green Apartment Complex in Cheonan, South Chungcheong, began to get unwieldy. There were civil lawsuits filed between the candidates and criminal prosecutions.

A court ordered that the Cheonan branch of the National Election Commission preside over elections. It was the first time the government had intervened in apartment community elections.

In Jamsil, officials from the Songpa branch of the National Election Commission were asked to oversee election day proceedings for the April 4 election at the request of the apartment’s electoral commission.

“The government’s support for elections outside the government, such as those taking place in apartment communities, is essential to the nation’s ability to conduct honorable election campaigns,” said a NEC official from the Songpa branch who wished to remain anonymous.

Choi, from Solidarity for a Desirable Apartment Community and Culture, echoed the sentiment.

“What is happening in elections in apartment communities could actually be used as a yardstick for measuring where our country’s democracy stands.”