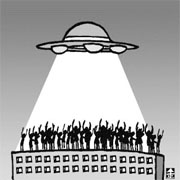 “At midnight on Dec. 20, the Earth will be swept away by a great flood and fall to its doom” is the prophecy that brings a group of believers to a hilltop waiting for a spaceship to come save them.

The appointed time finally arrives and the followers of “space saviors” who have abandoned families and assets wait in suspense.

They wait and wait, and finally break out in tears of confusion and fear. The prophet and leader of the cult then announces a surprising revelation. “Heaven has been impressed by your belief. The Earth has been saved.”

The people jump in joy and phone the press in a flurry to inform them that mankind has been saved by their belief.

The story is not a scene from a sci-fi movie or a novel. It is a true story that took place around Christmas in Illinois in 1954. The incident inspired the social behavior study known as cognitive dissonance theory.

Psychologist Leon Festinger in his 1956 book “When Prophecy Fails” offered an insider’s account of the Illinois doomsday fiasco, depicting how the cult’s members turned more fervent after the leader’s end of the world prophecy failed to come true. He pioneered the theory that when people find what they believed to be wrong, they tend to rationalize by accepting a new belief to lessen or relieve the discomfort from dissonance.

The best example is the first televised presidential election debate between Senator John F. Kennedy and Vice President Richard Nixon in 1960. Response to the debate was evenly matched.

Supporters of Kennedy and Nixon both claimed their respective candidate was the debate’s winner.

Festinger would be pleased with his theory if he witnessed the recent phenomenon driven by blind collective belief on the Korean Peninsula.

In South Korea, acolytes of a former president have become more zealous and fervid advocates after he was implicated in a bribery scandal.

In the North, the communist regime is proselytizing its successful satellite launch even when the entire world knows that the rocket fell into the Pacific Ocean.

Both are no different from those waiting around for spaceship saviors.

They may have staked too much on what they believed as truth that they cannot accept it as false.

They cannot but convince themselves to go on believing or even cajole others to join in order to further justify their rationalization.

Even what’s false can be deemed true if enough people believe in it.

That’s another social behavior theory. We can learn a lot about psychology these days.