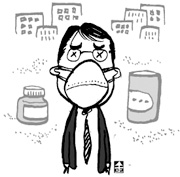 These are the outstanding characteristics of the French nuclear-powered aircraft carrier Clemenceau that was once the pride of the French Navy.

However, the fate of the ship did not match her glory. After it was decommissioned in 1997, it wandered the seas to find a place to be disposed. It visited Spain, Turkey and India for disposal but was turned away. That was because the vessel had around 700 tons of asbestos, a carcinogenic substance, in nooks and crannies all over its body. In February, the Clemenceau finally found a company that would dismantle it and was moved to Tees Bay in northeastern England.

In 2005, the Japanese islands were inundated with fear about asbestos. It was revealed that around one-fourth of the old workers at the Kubota factory that had manufactured construction materials and water pipes with asbestos in the 1970s had succumbed to malignant mesothelioma, a form of cancer.

When a patient has the disease, malignant cells develop in the outer lining of the lungs. The damage from exposure to asbestos was discovered around 30 years later because it was latent for such a long time.

Three of the factory workers’ wives were also killed by the disease. The wives had constantly inhaled the asbestos powder that remained in their husbands’ work clothes.

As it was known that asbestos was widely used as a construction material until the 1980s, many schools moved to new buildings while the toxic substance was removed from old buildings.

Asbestos was once a popular material, even called the miracle mineral. Because of its resistance to heat and fire it was widely used as a heat insulator and was part of brake pads and clutches. It was not until the 1970s that it became known that inhalation of the thin fibrous particles causes serious damage to the respiratory system. Developed countries only banned the use of asbestos in the late 1980s. In its report on asbestos, the environmental research agency of the European Commission pointed out that measures against the use of asbestos were taken belatedly.

In Korea, it has been revealed that medical products and cosmetics such as baby powder include asbestos, spreading worries about potential harm from the material. It is shocking that a material that is banned around the world is still being used. There is no guarantee that old buildings that are being torn down across the country are not discharging asbestos into the air.

Although the warning came too late, we should learn a lesson from cases in other countries and prepare measures as soon as possible.