Baby strollers pushed into the limelight

Baby strollers pushed into the limelight 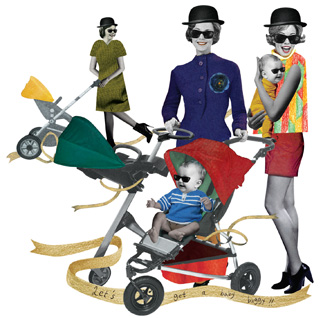 Dozens of women with kids sitting on their laps were watching the willowy models stride down the runway.

Unlike the audience at most fashion shows, the women here weren’t very interested in what the models were wearing. At this event, taking place in the Grand Ballroom at the Westin Chosun Hotel in central Seoul, the focus of attention was on what the models were pushing: rainbow-colored strollers.

The women had come to the buggy show en masse as mothers with a shared interest.

“We’re members of an Internet community for Maclaren users,” said Park Ji-young, a 33-year-old mother of two children, in a low voice as a model, whose makeup, hair and clothes perfectly coordinated with the colors and design of the buggy she was in charge of, tottered back behind the drapes. Maclaren is a U.K.-based parenting lifestyle company.

“We’re here to have a look at the new strollers for this year,” Park added.

And Safian, the local importer of the British stroller, and the organizer of the show, takes notice because pushchairs for kids are taking over as the baby transport of choice.

“We sell very few podaegi [the cloth Korean women used to use to carry their babies on their backs] these days,” said Kang Kum-soon, a saleswoman for Happy Land, a baby clothing brand, at the retailer’s Deungchon-dong branch, eastern Seoul. “Sometimes grandmas who take care of their grandchildren come in and buy them, that’s all.” 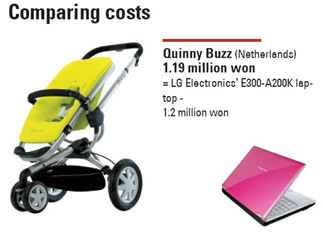 To find out more about strollers, parents, especially mothers, have started to join online communities where they can share tips and information.

“We’re very surprised to see the scale of the Internet community set up by Korean mothers,” said Rebecca Baiul, a senior designer of Maclaren, in an e-mailed statement.

One anecdote tells it all. Apparently, Maclaren had to change its 40-year-old design policy in March 2006 after Korean mothers used the Maclaren online community, which was set up in 2002, to urge the manufacturer to make the canopies on the strollers’ longer. In 2006, there were 12,000 members and now around 25,000.

“Korean mothers didn’t like the idea of their babies being exposed to ultraviolet rays,” said Shin Jin-sook, a promotions representative of Maclaren.

The Maclaren event at the Westin Chosun Hotel is one of many similar gatherings for parents. Lee Kyung-eun, the mother of 11-month-old girl, manages an Internet community with 1,330 members from her home in Gimpo, Gyeonggi. Her group is called Quinny Love and is dedicated to the Dutch stroller Quinny.

Under the nickname Red October, Lee is organizing an event at Everland, an amusement park located in Yongin, Gyeonggi, for April 23.

Another stroller squad made an appearance on March 27 at Lotte Hotel, Sogong-dong, central Seoul. Stokke Xplory Lovers, the biggest online community for Stokke stroller users, had been invited by Papa and Co., an importer of Stokke products, to check out new models for this year. Stokke Xplory Lovers has 4,305 members.

People say Korean businesses related to children stand a better chance of weathering a recession, and industry officials say the stroller market, especially the one for high-end buggies, is virtually immune to the ravages of a blighted economy. 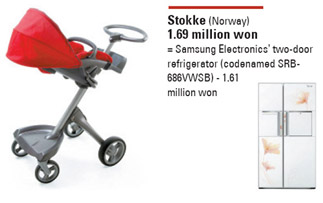 “Most mothers want to give the best to their kids,” said Kim Seung-sik, the director of Papa and Co.

And a desire for better quality has parents looking to imported goods. “When we started to import Maclaren in 2002, only three imported stroller brands were available, but it’s hard to find any local brands these days,” said Yi Sang-min, president of Safian Company Ltd.

Although sellers don’t want to give exact information about sales increases, Papa and Co. has seen an annual growth of around 15 percent, according to the company. Maclaren Korea says it enjoyed a 150 percent sales increase last year compared to 2002, the year the business launched.

So how much are parents prepared to spend?

According to an online survey conducted by the JoongAng Daily last month, 31 of the 101 parents surveyed belonging to Moms Holic, an online community where moms and dads share parenting tips, said they would spend between 300,000 ($226) and 500,000 won on a stroller, while 27 mothers said they would shell out between 500,000 won and 800,000 won. Twenty-one mothers from the group, which boasts a nationwide membership of 753,086, said they’d fork out 1 million won or more. 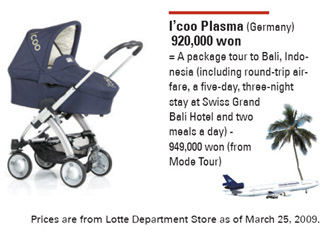 In another survey, 58 of 154 parents surveyed at Moms Holic and the online community People Whose Name is Mother said they would buy a stroller for more than 1 million won if they could afford to.

“I believe there is a close tie between a stroller and a baby’s health, so I’m not even thinking about buying a cheap one,” wrote a parent using the ID Hagojibi who participated in the online survey at Moms Holic.

“I’m thinking about choosing a stroller between 700,000 and 800,000 won with big wheels so my baby won’t be exposed to shock from uneven sidewalks and roads,” said Kim Yun-jung, a 30-year-old expectant mother whose baby is due next month.


The price of safety

However, a higher price tag does not seem to guarantee safety, according to a recent report.

The state-run Korea Consumer Agency conducted a safety investigation on 11 stroller products and issued the results on April 7.

You might be forgiven for thinking an expensive buggy imported from overseas would score the top marks on any kind of safety test, but you’d be wrong.

According to the KCA, it was the local brand Capella Clover (210,000 won) that was assessed as excellent, while imported brands Maclaren Techno XT (480,000 won) and Bebecar Prime (630,000 won) were labeled as average.

Another connection between cars and strollers is status. In a nation where one’s car size is still judged as a token of wealth, owning a fancy imported stroller is a new means of projecting your own or estimating others’ wealth.

One good example is found from Stokke’s sky-high popularity. As of March 25, the Norwegian stroller sold out despite a price tag of 1.69 million won at Lotte Department Store.

“Even if you order it now, you won’t get it until May,” said Ahn Hyun-kyung, a saleswoman who works at the main branch of Lotte Department Store in central Seoul.

When asked if there are discounts given to certain credit card holders, Ahn said Stokke sticks to a no-discount policy.

Although a Stokke buggy costs the same as a brand-new refrigerator here, it’s still a popular brand.

Inevitably, due to the nature of consumerism, parents go green with envy when they see other parents with a fancier buggy.

“To be honest, I get jealous when I see mothers pushing pricey strollers,” said a 29-year-old mom-to-be who didn’t want to be named in this article.

“I got a hand-me-down stroller from a cousin, so I couldn’t really justify going out and buying a Stokke,” said Shin Eun-sil, a 30-year-old mother with an 8-month-old son.

It’s hardly surprising. As with other fashion choices, people think their favorite brands represent their lifestyle, said Choi Soon-wha, a senior researcher at Samsung Economic Research Institute, and the choice of stroller is no different.

Companies aren’t going to just stand back and watch. To capitalize on the stroller craze, local importers have introduced a string of pricey strollers ranging from 2 million won to 3 million won.

On March 25, Papa and Co. unveiled a stroller from Germany with a price tag of 5.2 million won, the most expensive one so far in Korea. YK Trading Co., an importer of the Dutch stroller Quinny, introduced a designer stroller last month that costs 3 million won.

Other high-end strollers such as Silver Cross and Bugaboo are favorites among mothers. The top Silver Cross model costs around 4 million won, and for a Bugaboo, 2 million won.

“Mothers often say that they want to express themselves with pricey strollers because the stroller reflects one’s wealth and lifestyle,” said Kim Yong-beom, a manager at EFE, a company specializing in nursing goods as well as importing stroller brands such as Silver Cross.

“They say the mind-set is pretty much the same for men who love to show off with cars.”