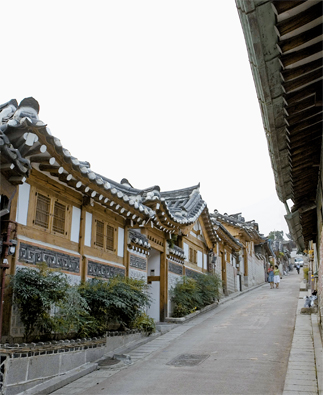 A typical hanok, or Korean traditional house, is characterized by tranquility. The aging walls and pillars show the passage of time while the beauty of the gray roof tiles is redolent of more solemn times.

A typical hanok consists of daecheong, a semi-open space with a spacious floor under the roofed main hall. There are bedrooms - one main and the other smaller - on both sides of the hall. The openness and roominess comes from the structure since a large portion of its wall space is occupied by windows.

“Without windows and doors, it is not an overstatement to say that hanok is nothing but pillars,” wrote Jeong Min-ja, the author of “The Making of Hanok by Arumjigi.”

The bedrooms normally have built-in closets. Most household goods, including blankets and mattresses, are stacked in these storage spaces, making the sleeping areas feel more spacious.

The hanok that Joseon Dynasty aristocrats lived in were divided into an inner house for women and an outer house for men. The head of the household received his guests in the outer section, where the father and eldest son resided.

Despite the rich tradition of hanok, it is no exaggeration to say that many Koreans, and of course non-Koreans, have never had the chance to stay in hanok, but these days it is possible.

To promote hanok culture and help tourists find one they can stay in, the government set up a Web site (http://korean.visitkorea.or.kr/hanok) this month that contains information on 145 hanok available for lodging across the nation.

In addition, the Ministry of Culture, Sports and Tourism and the Korea Tourism Organization have been subsidizing renovations at over 100 hanok to make the aging homes more suitable for commercial lodging.

Visitors can search hanok by location, price and program. The site also has explanations on tourist destinations nearby, and an English language service will be available soon, the ministry says.

“The Web site was created to help visitors experience the Korean traditional residential style and learn about the advantages of living in hanok,” said Jung Jae-hwon, an employee at the tourism organization.

To mark the launch of the Web site, the ministry will provide free lodging and cultural programs for 80 people at a hanok in Gangneung, Gangwon, on April 25 and 26.

The Gangneung Seongyojang, built during the Joseon Dynasty (1392-1910), was the first privately-owned hanok to be registered as a cultural asset. There will be traditional masked performances, folk plays and sessions on Korean etiquette and woodcraft.

Interested parties can apply via KTO’s Web site (www.visitkorea.or.kr) through April 19. A similar event is scheduled for a hanok in Andong, North Gyeongsang, on May 23 and 24. More information on the second event will be available later from the tourist organization. 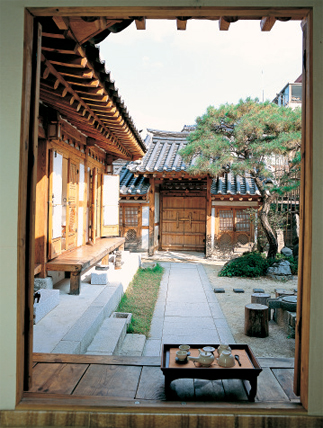 Rakkojae in Jongno District, central Seoul, means a place where one can feel peace and get a glimpse into the past.

This 130-year-old hanok was used by Jindan Hakhoe, a group of scholars who resisted Japanese colonialism by studying Korean history and traditions in the mid 1930s.

Now the lodge belongs to a Korean-American entrepreneur Ahn Young-hwan, who bought it in 2003 and renovated it. Because of the decaying roof structure, only one-fifth of the original roof materials were saved and reused, according to Ahn. It is now a modern, convenient facility, which serves Korean traditional meals. 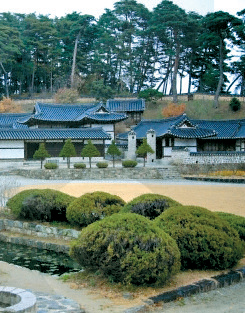 Seongyojang in Gangwon, designated as a national cultural asset, is considered one of the biggest and most elegant of hanok.

The 10 buildings and 130 rooms in the mansion were built 300 years ago by Lee Nae-bun, a distant descendant of King Sejong (1397-1450), one of Korea’s most renowned rulers. Unusually, there are two front gates. The extra one gave women easier access to their rooms.

Today, the mansion is popular for film shoots and tourists. It offers accommodation, traditional cultural experiences inside thatch-roofed houses and arts performances in the yard. There is also a traditional Korean restaurant in the mansion. Room rates are from 20,000 won to 100,000 won. Breakfast is included. Credit cards are not accepted. Call (033) 646-3270, e-mail help@knsgj.net or visit www.knsgj.net. 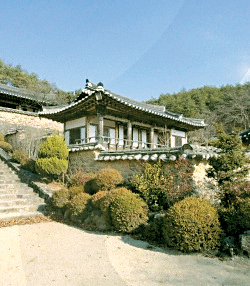 
Ocheongunjari in Andong, North Gyeongsang, has been in the Gwangsan Kim family for 21 generations. This historical legacy holds over 1,000 ancient documents and 429 artifacts dating back to the end of the Goryeo Dynasty (918-1392). While the exterior is perfectly preserved with its traditional beauty, the interior has been redecorated. Bed sheets, fans, individual bathrooms and even an English guide will be available. Behind the house, there is an exhibition that displays many of the important items left behind by the Kim family such as papers of census registration and land documents.