[FOOD&KOREA]The fish with the golden glow

[FOOD&KOREA]The fish with the golden glow 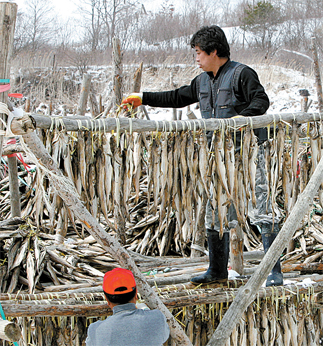 Pollack is an essential part of the Korean diet. There are many varieties of this fish, but the most flavorful is hwangtae, or dried pollack.

It is said that you need the full assistance of the gods to get the perfect hwangtae flavor, as climate plays a crucial role in the multi-step drying process.

Pollack are caught during the peak season between November and January. They are then transported to drying facilities called deok-jang, where, after being hung upside-down, they are frozen naturally in the bitter cold. Exposure to strong winds dries the meat, which then bloats like a sponge from the moisture of the snow. This process is then repeated more than 20 times over a period of 4 to 5 months, leaving the hwangtae with a golden glow.

A large majority of hwangtae - 70 percent - comes from Inje, Gangwon. After the Korean War, the pollack fishermen of Hamgyong Province in North Korea migrated south, searching for the perfect place to continue their tradition of preserving pollack. That’s when they found Inje, which has a climate similar to the conditions in their former hometowns. Inje’s harsh climate, which is often as low as minus 20 degrees Celsius, (-13 degrees Fahrenheit) makes it the ideal place for producing high-quality hwangtae. 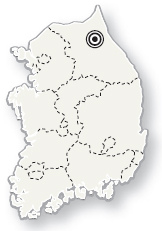 Dried pollack is rich in vitamin A, packs a lot of protein and has a low fat content of 0.9 percent. It can be used in a variety of dishes, but the most popular are hwangtaeguk, or hwangtae soup, and hwangtaegui, roasted hwangtae. Hwangtaeguk is said to do wonders for hangovers.

This nutritious and flavorful delicacy is enjoyed throughout Korea especially in April when it is freshly harvested from the deok-jangs of Gangwon.