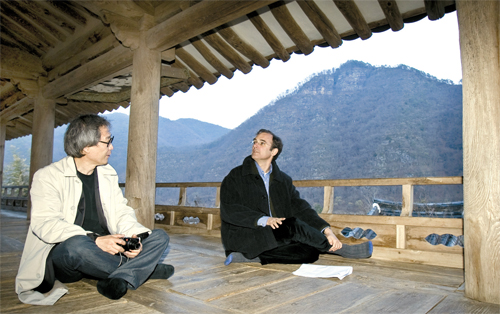 
It was a late afternoon toward the end of last month when Seung H-sang, head of the construction design firm Iroje, walked into Byeongsan Seowon, a memorial hall for Confucian scholars in Andong, North Gyeongsang, that dates back to the 16th century.

His companion was Barry Bergdoll, architecture and design curator of the Museum of Modern Art (MoMA) in New York. 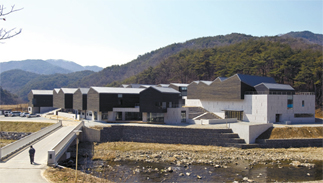 The Buddhist Culture Center in Gongju, South Chungcheong, which was designed by Seung H-sang.

“This is one of the most beautiful traditional buildings I’ve seen so far in Korea,” remarked Bergdoll, taking in the structure.

In the fading light, Bergdoll, who was in Korea for the first time, absorbed the tranquil surroundings and traditional building design, going over ideas on architectural theory and philosophy with Seung. 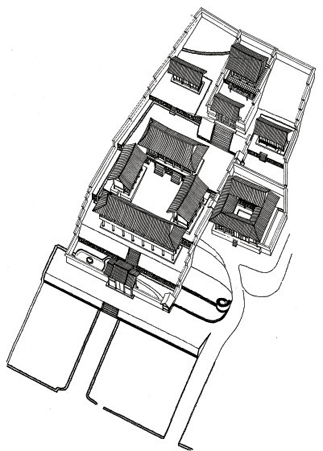 The blueprint of the Buddhist Culture Center in Gongju, South Chungcheong.

During their discussions, with the shadows lengthening around them, Seung mentioned that architects should take into consideration geography and the personal history of the residents living nearby when designing a building.

Bergdoll, who had been invited to Korea by an art history forum in Cheongju, North Chungcheong, observed the communication between the interior and the exterior of the buildings in Andong.

“Traditional Korean buildings have a small interior space and are designed to open up to the outside,” Bergdoll said. “Korean architecture is typified by a set of buildings built in line with geographic surroundings.”

The two men met last year at the Venice Biennale where they shared their passion for architectural history. After receiving the invite to give a lecture for the Cheongju art history forum and the Korean Association of Architectural History, Bergdoll contacted Seung with a request.

Could Seung show him some representative elements of Korean architecture during his short stay in the country?

After looking around Seoul with Seung, Bergdoll said, “People live in a modern society but they seem to be strongly attached to tradition.”

Bergdoll also mentioned the time factor. “Excellent architecture should be able to survive time,” he said. “I have seen great architectural concepts last for 10 years, or sometimes 15 years.”

Though Confucianism is no longer studied at Byeongsan Seowon, the beauty of the 400-year-old building remains intact.

Then, where does the beauty of the Byeongsan Seowon come from? Bergdoll and Seung climbed up to Mandaeru, a pavilion inside Byeongsan Seowon. From there, they could see a mountain beside Nakdong River.

“[Mandaeru] must have been built with careful consideration of the environment,” Bergdoll said. “The simplicity of the architecture shows a sense of modernism.”

Byeongsan Seowon was built by the Confucian scholar Ryu Seong-ryong (1542-1607) on a space a little higher than the nearby river. “It feels as if Byeongsan Seowon stands on the slow-flowing waterway,” Bergdoll said.

He went on: “Those who built this place tried to express a sense of peace and tranquility. People living in the modern age cannot appreciate this place because it takes time and experience to feel the delicate emotion.”

Referring to the slope on which Byeongsan Seowon was built, Bergdoll said, “Instead of changing the environment, [the builders] adapted to it.”

Seung first visited Byeongsan Seowon 30 years ago. “I wasn’t very impressed in the beginning,” Seung said, but 10 years later it’s a different story. “I was very moved. I’m not sure why I felt that way initially. I think my view of architecture has changed over the years. In the beginning, I thought architecture was just an object. I didn’t see the spirit inside,” he said.

Asked for a definition of good architecture, Seung said, “Architecture should be able to make people noble and beautiful. There is a saying that couples become more alike over time when they live together. This is because they live together in the same space. Their behavior and habits are influenced by the space. It takes a long time but there is certainly influence,” he said.

“A good urban environment creates a society. A lot of social conflict comes from the structure of the city. Clashes over redevelopment are an example,” he said.

This philosophy runs deep in Seung’s work. The student center building he designed on the campus at Daejeon University stands on a steep slope. There used to be a canyon through which water flowed, but it was filled in long ago.

For that building, Seung designed a staircase to evoke the spirit of the canyon. It continues through a dormitory designed by architect Min Hyeon-sik and down the slope.

“We did not discuss the design with each other but we realized that we had similar thoughts,” Seung said.

Those who saw the two buildings were surprised that Seung and Min did not talk about their designs in advance, he said.

Bergdoll said not all architectural pieces are built as their architect has planned.

“There are architects who work alone but most work with others,” Bergdoll said. “Architecture is a very realistic activity.”

Channeling the 19th-century German statesman Otto von Bismarck, who said, “Politics is the art of the possible,” Bergdoll said, “Architecture is a very political art.”

The MoMA curator said constant communication, mainly with customers, is imperative in architecture projects. “There wouldn’t be any good architects if there weren’t good customers,” he said.

After visiting Byeongsan Seowon, the two designers went to the Buddhist Culture Center located near Magok Temple in Gongju, South Chungcheong. The center, designed by Seung, a Christian, is a place for meditation and has a creek flowing around it.

“There was a huge controversy in the United States 50 years ago when a Catholic architect designed a synagogue,” Sung said.

Asked about the challenges facing architects in the 21st century, Bergdoll said, “There are energy and environmental problems. There are no architects who aren’t aware that they need to study the issues,” he said.

“Secondly, there is an issue of urbanization. Fifty-one percent of the world’s population lives in urban areas,” he said.

The issue of urbanization led Bergdoll to pay attention to Ssamziegil, a complex of small art galleries and handicraft shops in Insa-dong, central Seoul. Instead of installing staircases, people can walk up a curved slope to higher floors.

It is relatively a large building in Insa-dong but it does not overwhelm its surroundings. “We need these kinds of buildings in New York,” Bergdoll said. “When a high-rise is constructed next to a small building, the surroundings change suddenly.”

Bergdoll left Korea after a week’s sojourn, but he said he needed more time to see all he wanted to see in Seoul. “I saw a few individual buildings but did not have a clear view of the entire city,” he said. “I get to know the structure of a city if I travel around with a map taking subways and getting lost from time to time.”

Bergdoll said, however, he was glad to meet people with passion for architecture.