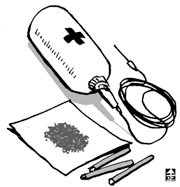 Last year, a team of researchers found cannabis packed into a wooden bowl resting inside a 2,700-year-old grave in the Gobi Desert in China. Chinese researchers estimated that people at that time might have burned marijuana and inhaled the smoke. Despite its long history as a hallucinogenic drug, the thorny controversy over smoking marijuana never ceases.

In 2007, a study by the University of California suggested that AIDS patients can relieve stubborn nerve pain in their feet by smoking the drug.

The active ingredient in marijuana also cuts tumor growth in lung cancer and significantly reduces the ability of the cancer to spread, a 2007 Harvard Medical School study showed.

However, other research shows that smoking marijuana increases the risk of developing schizophrenia.

Tetrahydrocannabinol or THC, the main psychoactive substance found in cannabis, relieves inflammation, pain and anxiety, but lowers the ability to perceive time and space and impairs the senses of sight and smell.

Smoking one marijuana joint is equivalent to smoking five cigarettes in terms of the damage it does to your lungs, as it is inhaled more deeply, usually without a filter and held in the lungs longer than cigarette smoke. There is also a higher possibility of serious offenses being committed while high on the drug.

Some people who were secretly cultivating marijuana in apartments or offices in Korea were recently arrested.

Although the cannabis plant grows best under sunlight, it can be grown indoors. Special attention, however, must be paid to maintaining the appropriate temperature and humidity levels as well as lighting.

Some insist that growing marijuana should be actively encouraged to save the Earth. It absorbs carbon dioxide, its seed oil can be used for biodiesel and its stem as an ingredient for eco-friendly fibers.

However, before we accept the assertion that marijuana should be widely cultivated for environmental reasons, we need to be sure that it’s not just an excuse to party.