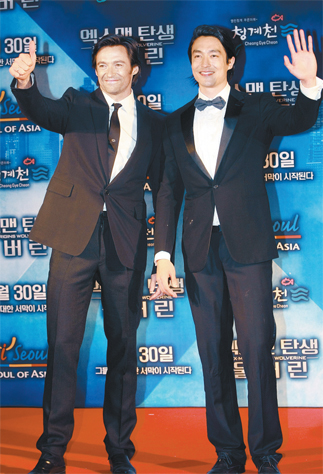 Jackman, an Australian-born actor, who recently hosted the 81st Academy Awards in February, appears as the mutant superhero.

The Korean-American Henney, who rose to stardom for his role in 2005 MBC-TV’s “My Lovely Sam-soon,” plays Agent Zero, one of Wolverine’s enemies.

“Wolverine is a mutant with very long claws and a lot of anger management issues,” said Jackman at the press conference last Friday afternoon at Korea House in central Seoul.

“My character also has anger management issues. Big problem,” Henney added in English, after introducing himself fluently in Korean.

The 29-year-old joined Wolverine after the casting director for the film watched “My Father,” a Korean film made in 2007 about an adopted son who searches for his biological parents in Korea.

While Henney’s love for Korea was frequently expressed in the past, Jackman revealed thoughts that are less widely known.

“[My father] was always talking about Korea. I feel like I know Korea very well,” he said, referring to his father’s frequent business trips to the country. “I was quite insistent that we come here, not just because of Daniel. There were many times when we were shooting when we talked about this very day.”

“Hello. It’s good to be in Seoul,” he said slowly, showing off his well-rehearsed Korean.

Jackman was certainly the superhero of the day. After he got comfortable on stage, the 40-year-old actor suddenly took off his tie and threw it to his adoring fans. Then he ripped off his shirt to reveal a black shirt bearing the words “I Love Seoul.”

When the crowd began to cheer, he lead them in the famous Korean football anthem for supporters, “Oh Pilseung Korea.”

“I came to Korea in 2006 just before the World Cup. I was wearing the Red Devils shirt, but many people around the globe thought it was a Manchester United shirt,” he had explained earlier in the press conference.

He was referring to the red shirts popular with football fans in Korea during the 2002 and 2006 World Cups.

“I still have the shirt,” he added. “If I’m not going for Australia, I always go for Korea in soccer.”

The two actors left Seoul on Saturday to the disappointment of many, but the consolation is the movie opens in theaters all across the nation on April 30.