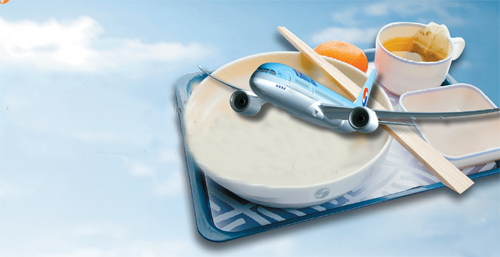 Despite the economic slump, the travel industry continues to court first-class passengers with upgraded services and luxury in-flight meals.

According to the Korean Tourism Organization, the number of Korean outbound travelers dropped 33.5 percent from a year ago to 753,641 in February.

And both Korean Air and Asiana Airlines, the two major airlines in Korea, said they expect operating losses for the first three months of this year.

However, the number of first-class passengers has remained stable throughout the recent turmoil, Korean Air said, although the airline didn’t release specific figures.

“First class means a lot for airlines as many of the passengers are opinion leaders,” said Lim Young-don, deputy general manager of the in-flight service team at Korean Air.

“They are our high-revenue clients,” he added, pointing out that first-class tickets are up to five times more expensive than economy-class fares. 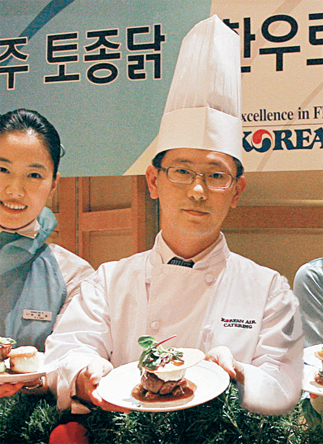 As part of its upgraded package for first-class passengers, Korean Air has just started serving domestic beef (hanwoo) and chicken produced at a farm on the slope of Mount Halla on Jeju Island off the southern coast of Korea.

Chickens usually subsist on run-of-the-mill animal feed, but these fellows are fed paprika, cherry tomato and bok choy as well as organic corn, beans, barley and wheat. The cattle and chicken grown at the farm drink only spring water drawn from a source 300 meters (984 feet) below ground.

“We used imported beef in the past but we decided to switch to Korean beef to show the high quality of local food materials,” said Kim Tae-kyun, a culinary development manager at Korean Air. “We are also using many seasonal vegetables.”

Other airlines are improving their first-class services, too, especially in the food department. To upgrade menus, several airlines are collaborating with chefs at premium restaurants and hotels or food research groups.

Asiana is now offering a five-course meal for first-class passengers, including fresh lettuce and other salad leaves which passengers use to wrap grilled beef bulgogi and steamed rice. This dish is called ssambab.

The airline also serves its kimchi and hot pepper paste sides in round bowls on a large wooden tray in first class.

Another strategy Asiana is pursuing is to develop menus with the Institute of Korean Royal Cuisine. It sought advice from the Italian restaurant La Cucina about how to prepare Italian cuisine.

Similarly, Singapore Airlines created an international panel of prized chefs, including George Blanc, who has been awarded three Michelin stars. He acts as a consultant for the airline’s culinary development.

And Air France’s first-class menu has been designed by Guy Martin, a chef from Grand Vefour, a Paris-based restaurant, which also boasts three Michelin stars.

Some chefs even board airplanes and prepare the food for the first-class passengers.

A couple of months ago, Lufthansa invited the Millennium Seoul Hilton’s executive chef Park Hyo-nam to provide custom-made menus for passengers aboard flights as part of its Star Chef program, which has invited award-winning chefs onboard since 2000.

Part of the chef’s job is to spot trends that can be adapted to airline food. Today’s trend happens to be nutrition, airline chefs said.

“The menu for first class changes every quarter while popular dishes such as bibimbap [mixed vegetables with steamed rice] tend to stay,” said Kim, who worked in major hotels and restaurants and studied at Le Cordon Bleu in Paris before joining Korean Air.

“To enhance passengers’ well-being, we serve a number of colorful vegetables such as broccoli, paprika peppers and tomatoes,” Kim added.

With organic ingredients and top chefs on board, it seems anything is possible in first class. However, there are limits in terms of variety because of insufficient space and safety concerns.

“Dishes like hot pot are impossible on an airplane,” Kim said.

Airlines tend to avoid other foods as well for practical reasons.

Fried dishes like Korean pancakes become soggy over time and sashimi, or hoe in Korean, cannot be served because it can go bad easily and pose a health risk.

Boiling, roasting and frying are not allowed although some airlines have toasters, rice cookers and frying pans.

“There are many restrictions on developing menus for airplane food,” Kim said.

Another challenge is that so many dishes have to be prepared the day before the plane takes off.

“The most important thing in developing a menu is hygiene,” said Lee Chang-young, deputy general manager in the in-flight food and beverage department at Asiana. “It is more important than taste.”

Airline foods are made in factories located in the airports. Then, they are put onto food trolleys and cooled down at a temperature between zero and 5 degrees Celsius (32-41 Fahrenheit).

“We can keep the multiplication of bacteria to a minimum when the food is at zero to 5 degrees Celsius,” Lee said.

Dishes are prepared up to 24 hours before the plane takes off. For first class, the duration is much shorter.

According to Hazard Analysis and Critical Control Points standards, cold food should be used within 48 hours from the point of production. 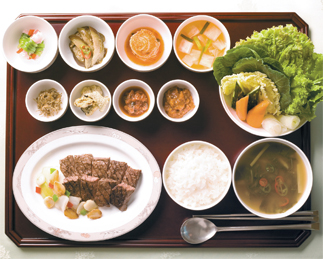 Warm foods need to be served within 72 hours.

Despite all the efforts to improve the quality of the food, there are still many people who say airline food disappoints.

“Changes in atmospheric pressure and the limited space on the airplane also affect how people feel about the food and that’s probably why many people feel that way,” said Cho Yong-moo, a public relations manager at Asiana.