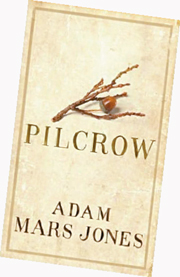 The humor and frankness of “Pilcrow” are quite exceptional. Central character James Cromer, immobilized by a childhood illness that leaves him brittle and dependent, chooses Pilcrow as a pseudonym; a way to conceal his identity but still leak his erudite opinions out into the world he does not understand.

Be warned; the feverish, wonderful tale he tells is an assault on the emotions, albeit a beautiful one.

My favorite part of this book, oddly, is its structure. Candid stories are delivered to the reader in little chunks, each signposted by a modest heading like “Mates” or “Net profit of joy.” Chapter numbers are too cumbersome for this tale, its delicate wisdom is far better suited to this fragmented structure.

The qualification in the book cover, specifying that this is in fact “A Novel” is more a necessity than a formality. Throughout the book there are moments so raw and so detailed you could swear it was a memoir. Perhaps Mars-Jones does draw on personal experience; it would not be the first time a writer blended his own reality into fiction. More than anything this sense of autobiographical honesty is a testament to how effective Mars-Jones is in cultivating an intimate rapport with readers. He spins his tiny tales, one after the other, with such adept and thorough characterization that you forget fiction has anything to do with it.

Mars-Jones captures a childhood and fledgling adulthood in 1950s Britain with clarity and warmth. Issues of family dynamics, finances, masculinity, adolescence and genius fall within his range and he deals with each gently yet boldly.

Following the interior voice of an extraordinary man growing up in the 1950s, Pilcrow is entertaining, clever and linguistically beautiful. The prose is every bit as important as the plot and it is a pleasure to read. It is not so much a “page-turner” as something that you find yourself yearning to get back to.

Mind you, if the central character John Cromer is your friend, he is the kind you never quite understand. His personality is lucid, his character so loaded with paradox you can scarcely pin him down. He is a constant intrigue, never static, extraordinary yet desperately ordinary. The dysfunction that surrounds him only forces his exceptional perspective on the world further inside his psyche.

If you love to be drawn in by a biography, ushered into the innermost thoughts or events of someone’s childhood and upbringing, but you often tire of a celebrity author’s preoccupation with their own importance and yearn for a beautifully structured story, this is the book for you.

It’s a hybrid memoir-cum-novel that will delight the fiction reader in you every bit as much as the reader who wants to feel truth and realism between the pages of the book they next read.

Mars-Jones’ creation John Cromer is a witty, savvy little fellow from start to finish and I hope you enjoy making his acquaintance.

Oh, and ¶ is a pilcrow, if you were wondering.