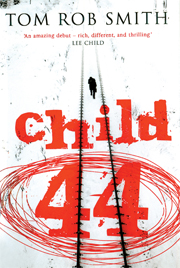 Tom Rob Smith’s debut novel “Child 44” falls neatly into the category of “hopelessly far-fetched murder mystery that you can’t help but like even though it’s really a bit trashy.”

I ordered the book because the literary editor at The Financial Times newspaper had included it on a list of Best Books 2008 and critics were falling over themselves to lavish praise on this dark tale of a serial killer running amok in the frozen wastes of central Russia.

The book made the long list for the Man Booker Prize for Fiction, and no less a figure than Robert “Chinatown” Towne lends his name to the promotional blurb on the dust jacket.

“It’s a tale that grabs you by the throat and simply never lets go,” he cries, though saying a story strangles you to death is not necessarily a compliment.

In brief, it’s 1953 in Stalin’s Soviet Union and war hero Leo Demidov is ordered to treat the recent murder of a young child as an accident, even though it’s perfectly obvious to the child’s family that the boy was murdered.

Despite his loyalty to his job and to the Soviet Union, Leo is rattled and secretly harbors doubts that the murder of the child is an isolated case.

His superiors in the Ministry sense Leo is weakening and they challenge his allegiance by trumping up allegations that Leo’s wife is an agent for the West.

Given the chance to betray his wife and save himself, Leo chooses his wife and is exiled to the Urals for his pains.

There, he discovers, oh-so-fortunately, that another child has been killed and hacked up in an almost identical fashion to the boy at the start of the book - guts removed, a piece of string tied to the leg and dirt stuffed in the victim’s mouth.

Leo is now convinced that there must be a serial killer on the loose, which is a dangerous thought to have in one’s head because under Stalin there is no crime, and that’s official.

To suggest otherwise would mean you doubt Stalin’s ability to rule the land, a crime punishable by a very long stay in a gruesome gulag where a bowl of thin gruel would be the high point of the day.

Up to this point of the book I was fairly involved. The author proves to be a dab hand at creating a chilly atmosphere of fear and paranoia that must have run deep in totalitarian Moscow.

It’s a city where colleagues spy on each other and your chances of survival are dependent on your loyalty to the state rather than to your family.

Love is not a currency with much worth on the street, as Leo’s wife Raisa finds out. She married Leo mainly because she was worried she would be punished if she declined his offer.

Leo is highly placed in the security forces and is used to getting his own way, and Raisa has known a lot of people who “disappeared” in the middle of the night courtesy of State Security.

But the novel is hampered by two poor bits of writing. The first is the one-dimensional “baddie” in the form of Vasili, a colleague determined to take over Leo’s office.

Then there’s the small matter of Leo happening upon an identical child murder in the remote town he’s exiled to as well as the ridiculous twist at the end of the story that you can hear blaring from two blocks away.

The author is actually a screenwriter and perhaps that’s the flaw. As a movie script, every page of this tale would glow like burning coal, with the author’s eye panning across the landscape. But as a novel, without the drama of the accompanying photography, all you have are the characters, but it’s hard to keep believing in the leads after they are sent to the Urals.

Smith, who’s barely 30, has since churned out a sequel to Child 44, working once more in the strained atmosphere of the Soviet Union in the 1950s. Leo reappears, Stalin is dead and the 1956 uprising in Hungary is on the horizon.