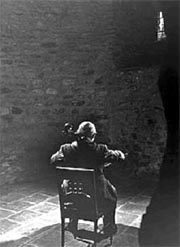 In a high-ceilinged, brick-walled room, a ray of sunlight peeping through the curtains of a small window is the only source of warmth and light until a cellist of advanced years starts playing one of Bach’s somber cello sonatas.

Photographer Yousuf Karsh (1908-2002) pauses to listen before taking a picture of the Spanish maestro Pablo Casals. Instead of the usual portrait, he snaps the back of his subject’s head rather than the face in order to illuminate the emotion of the performance, full of loneliness and the unfathomable stillness of a musician exiled from his home country.

Bringing the essence of his subjects to light is what made Karsh one of the world’s most accomplished portrait photographers, and some of his work is on display until May 9 at the Seoul Arts Center.

The exhibition was packed last weekend with people fascinated by the glowing portraits of historical figures such as Winston Churchill, Ernest Hemingway, Pablo Picasso, Albert Schweitzer and Audrey Hepburn, to name a few.

But what is so impressive is that the shots come across to the viewer as representative of monumental moments in history.

Karsh had an eye that pierced through the essence and truth of his subjects. In a span of some 60 years, Karsh was an ardent student of people. He read and listened to the works of the artists who sat for him and he studied his models’ paintings and sculptures.

Most of the pictures were taken where his models spent much of their time: Casals in a monastery in the south of France and Hemingway in a turtleneck sweater at a Havana beach in Cuba.

He spent time with his models, watched their eyes, posture and body movements. He found that hands spoke more loudly and emotionally than lips. He finally picked up his camera once he believed he had gotten to know his subject. In front of the lens, his models were at ease in their favorite clothes and movement. The result was that in Karsh’s world, they were exposed and bare, free of artificiality and affectation.

The Canadian photographer knew how to connect. He went the extra mile to understand his subjects more profoundly. Sympathizing is the first step toward opening someone’s mind, and Karsh was happy to share in the joy and sorrow of the people he worked with.

I hope that President Lee Myung-bak can take time to see the Karsh exhibition so he can learn something about connecting with people. Making radio speeches at this stage won’t win him many hearts.