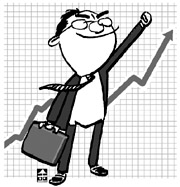 In the 15th century, long before pirates appeared off Somalia, navigation around the African continent was perilous. Europeans needed to find a new route around the southern part of Africa in order to reach the Orient and its spices with which to make their fortunes.

But sailors feared the myth that in the Atlantic Ocean, there was a dark green sea where whirlpools, reefs and monsters as big as houses lurked. For 10 years Portugal’s Prince Henry the Navigator launched fleets with his own money but the seamen were terrified and came home immediately. The prince believed the potential rewards would be much bigger than the fears and ordered the explorer Gil Eanes to embark on a voyage in 1434. Reluctantly, he succeeded in sailing around Cape Bojador, a headland on the bulge of northern Africa, heralding an era of long navigation in Europe.

Prince Henry sponsored navigation all his life and accumulated wealth. In short, it was a high-risk, high-profit business. In this light, it could be said that the Portuguese prince was the first venture capitalist.

Had it not been for capitalists who loved and appreciated adventure, many brilliant ideas and inventions would not have been realized. Thomas Edison’s lightbulb is one of them. John Pierpont Morgan was a legendary American who was never shy of supporting Edison’s works. He invested, for instance, a whopping $300,000 long before the lightbulb was even invented. Although Morgan generally preferred verified and safer businesses, he invested in Edison’s venture because he was curious about the technology of electricity. Thanks to this, his house on Madison Avenue became the first house lit by electricity in New York.

Investment in venture business is still appealing, although it is not as popular as before due to the economic crisis. Investment can lead not just to wealth, but also usher in a new world.

It must have been appealing even to the son of a former president who said he would set a good example by living as an ordinary person. It was said he was very interested in venture business and invested huge sums of money on various businesses while employed at a company.

However, he falls short of being called a venture capitalist. It was someone else who came up with the money, apparently because he was the son of the president. If the business went well, the son would become rich. Otherwise, he had nothing to lose.

What made Prince Henry and J.P. Morgan outstanding venture capitalists was the courageous spirit that allowed them to risk their own money. If the president’s son had lived as an ordinary employee, instead of imitating a venture capitalist without truly understanding what it means, he would have avoided all his troubles.