A women’s touch in the sports arena

A women’s touch in the sports arena 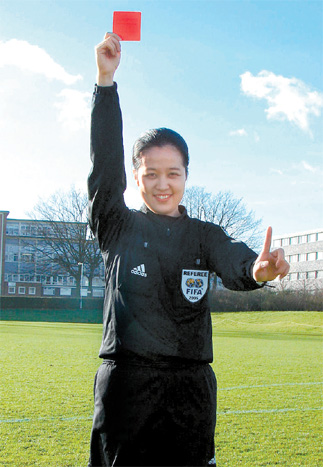 Hong Eun-ah, the youngest Korean woman to qualify as a FIFA referee.

There are two widespread misconceptions about women and sports: Women don’t like sports and they don’t know about them.

In most cultures around the world, including Korea’s, sport has been associated with muscles and scuffles, a domain for men and their fierce desire to compete.

However, times have changed and we’re now seeing increasing numbers of women engaged in the sporting world.

If you go to a court in Korea where a professional basketball game is taking place these days, you can usually spot women darting about in the background armed with walkie-talkies, managing media and public relations to promote their team.

Yu Yeong-sun, 40, has been head of the marketing team for the LG Sakers, a professional basketball team based in Changwon, South Gyeongsang, for three years now.

She was previously a sales manager working for LG Electronics, but in 2006 she had an unexpected chance to explore a new career in basketball.

“It’s all the same whether you work for a company’s sales division or in marketing for a basketball team.

“The most difficult time is when I feel that the field is still dominated and steered by men,” Yu said, hinting at obstacles that still exist for women in a male-dominated industry. 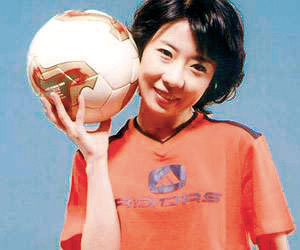 “However, I felt I was rewarded for all my struggles and efforts last Christmas when I saw a large number of our home fans in Changwon who were waiting in a long queue outside a stadium for up to about six hours before the game just to watch us play,” Yu said.

“I can confidently say that the events we plan for home games are unparalleled.”

Yu likes to sometimes devise surprises to cheer up players if the team loses a match or plays badly.

When the team suffered a run of defeats last month, she decided to plaster the walls of the team’s locker room with parody posters of the popular TV drama “Boys Over Flowers.”

The faces of the actors had been replaced with mugshots of the LG Sakers players.

In fact, Yu was closely related to the basketball world even before she joined the marketing team. 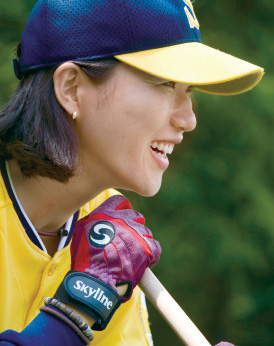 Her sister, Yu Yeong-ju, 38, became a well-known sportscaster for the Women’s Korean Basketball League after a career as a basketball player and coach.

Meanwhile, female announcers and reporters are making a name for themselves in baseball, too.

Female sportscasters at local cable TV sports channels such as KBS N Sports, a subsidiary of state-run KBS, are very popular among baseball fans not only because of their professionalism, but also due to the feminine qualities they bring to the job.

Kim Seok-ryu, 26, a KBS N Sports announcer, watches sport all year round. She reports on baseball games during summer and volleyball games in winter.

“I often get asked whether it is difficult for me to do this job because I have to spend so much time on the road, moving from city to city to report on games taking place around the country,” said Kim, who is now poised to become a fulltime professional sportscaster.

“But it’s a lot of fun to travel around Korea doing this job.” 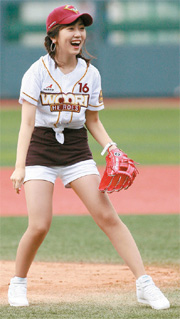 After a baseball game, it is customary for broadcasters to have a brief interview with the winning team’s manager and the MVP of the day.

Female sportscasters like Kim are now entrusted with this job because of merit.

“When I have an interview with a female reporter, I find myself answering with a smile as I feel I should be more polite,” Kim Seong-geun, manager of the Incheon-based professional baseball team SK Wyverns, once said.

Lee Eun-ha, 38, a sports reporter with 10 years experience who now runs her own radio program, “I Love Sports,” on MBC FM, says destiny led her to the sports world.

“I started sports reporting in 1998 when I unexpectedly had to cover for my senior who was doing the job,” Lee said.

“Many years later, I happened to see my diary, which I kept when I was a junior high school student, and it read, ‘Korea will be a sports power after the Seoul Olympics. 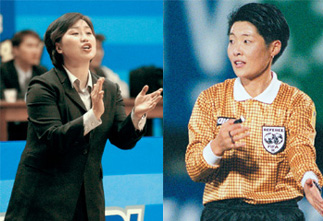 “The country will then need a large number of sports professionals and I want to be one of them.’

“What drives me to continue this job is that I love sports, from the bottom of my heart,” she added.

In the world of football, two Korean female referees have been in the spotlight.

Im retired from the post in 2005, but she’s still active in the field as a FIFA referee instructor.

Hong Eun-ah became the youngest Korean woman to qualify as a FIFA referee in 2003 at the age of 23.

She was the youngest of the 84 match officials refereeing at the Beijing 2008 Olympic football games.

She started playing baseball in 1992 when she was an elementary school student.

When she entered high school, she had to play on a boys-only team since the school just didn’t have a team for girls.

Her career was left in tatters, though, after all the university and professional teams in Korea turned her down, so she moved to Japan in 2002 to join a female baseball team there.

She returned to Korea in 2004 to initiate a female baseball team, Bimylie, an abbreviation of “Baseball is My Life,” which later became Sunrise.

The story of how Ahn and Bimylie went on to play in the 2004 Women’s World Series is expected to be made into a film soon, according to recent local media reports.