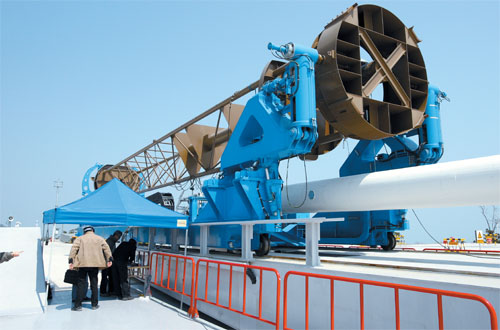 The launch pad at the Naro Space Center in Goheung County, South Jeolla, will be erected vertically before the rocket is fired. By Choi Jeong-dong

South Korea is preparing to send a satellite into orbit weeks after North Korea claimed it successfully put its own communications device into space.

The South’s scientists are hoping for better results since military analysts say Pyongyang’s recent rocket launch failed to put anything into orbit.

At Naro Space Center in Goheung County, South Jeolla, scientists and officials are working around the clock to launch the satellite by the July deadline.

At the center of all the activity is the launch pad flanked by three giant lightning rods, each 75 meters (246 feet) tall, to prevent the rocket being struck by Mother Nature.

If everything goes to plan, the Korea Space Launch Vehicle-1 (KSLV-1) rocket will rise upward for about 900 meters then make a turn southward and climb for another 300 kilometers before finally putting the Science and Technology Satellite-2 (STSAT-2) into orbit.

When the rocket is launched a special cooling system kicks in to dampen the effect of the heat emitted from the rocket. “The cooling system churns out 900 liters of water per second cooling the blaze,” said Lee Eun-jeong, an official with the center. “The white smoke you see when a rocket takes off is steam.”

The official said the launch pad was based on Russian designs and was tested last month by Russian officials. Until now, a total of 13 launch simulations have been conducted.

If the KSLV-1 successfully lifts off, South Korea will become the ninth country in the world to send a rocket to space from its own soil.

While the first rocket is the result of cooperation between Korea and Russia, later projects are expected to use mainly Korean technology. The first-stage rocket is made entirely with Russian technology. There are about 100 Russian scientists including 20 security officials working at the Naro Space Center.

As Russia doesn’t allow the transfer of rocket technology, South Korean scientists haven’t been able to participate in the assembly process.

Despite the countless simulations, a successful rocket launch is never guaranteed. Experts say the average success rate stands at only 27.2 percent.

The rocket KSLV-I is put together in an assembly building. [JoongAng Ilbo]

Out of the eight countries that have launched a rocket with their own technology, only three - Israel, France and Russia (Soviet Union) - have succeeded in their first try. South Korea’s own track record in developing space technology is short. The country launched its first satellite in 1992, from French Guiana. After that, nine more satellites have been launched but all with overseas technology.

The country’s efforts to explore space and acquire the necessary technology have recently stepped up. Last year, South Korea produced its first astronaut when Yi So-yeon became the second Asian woman to have traveled to space.

Yi made history on April 8 when she blasted off from the Baikonur Cosmodrome in Kazakhstan aboard the Soyuz spacecraft, becoming the 475th person to reach orbit. 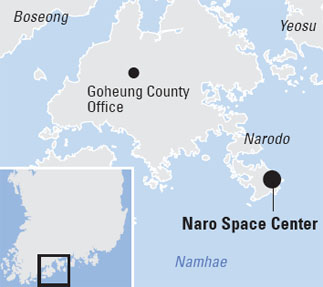